on May 12, 2017
Astro is the name in gaming headsets. They been for years. We loved, loved, loved the A40 we reviewed last year. But the competition is bearing down on them with offerings that feature style and substance for a good price. So how does their refresh of the A50 line measure up? 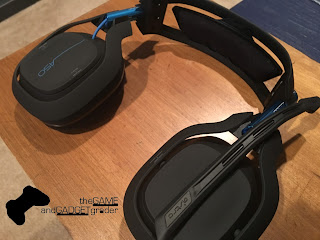 OVERVIEW:
Let's start with the biggest piece that the A50 will be judged on, the cost. It will run you $300, same as previous versions. The new A50s come in two color combos, the one we tried, a black with blue-highlights for  PS4 and a grey with green-highlights for Xbox One. The PS4 headset won’t let you chat on an Xbox One, and vice versa but both will work on PCs using USB so you don’t have to use an optical cable or a sound card.

HOW DO THEY LOOK/FEEL?:
This is the best looking headset on the market, period. Strong and modern design with sharp angles and great use of colors. They look impressive and serious from the moment you take them out just like the previous version. Although it looks heavy, they are not as they are made of soft yet tough plastic joined by two metal pipes that feature the color accent.

The ear cups are plush and sit over our ears and provide a nice seal. Passive noise canceling the world around you and immersing you in the digital world of your choice. A flip down and flexible microphone comes down from the left side. 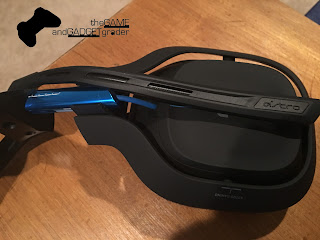 Comfort is a huge plus here. No fatigue in wearing them and they stay cool because of the large and soft ear cups. The A50s are meant for a long haul.

Here are where a slight issue rears its head. Let's start with the good though. First, the big addition to the new A50 is a wireless charging base station. Using contact points on both the headset and the base the headset will sit into the base to charge. The base also is the connection between the console and the headset in place of a traditional and true USB dongle, which many headsets are moving to.

The base is a huge plus because we never have to worry if the A50 is charged. Because the base station serves as a display stand as well, its natural to put the headset on the charger. 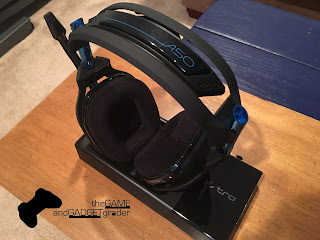 But another huge addition helps with battery life as well. That life is about 12-15 hours but when you add the fact that the A50 has internal gyros that detect movement, things get even better. If you put the headset down for just 30 seconds, it will automatically turn off. Pick it back up and by the time you set it on your ears it will have synced to the base station and be ready to go.

The microphone is once again top class. Crystal clear audio that everyone noticed right away. The mic is also more flexible and therefore more comfortable to use. Flip it up along side of the ear cup and its muted.

Also the sound is great. The bass and mids really shine in explosives and environmental noise. The highs could be better but because of the downloadable software that Astro offers, you can EQ the A50s with minimal effort to sound amazing.

The Dolby surround sound is a situational move but in games like Battlefield 1 or Rainbow Six: Siege, which are perfect for testing, the directional sound is incredible and accurate, giving you a foot up on the competition. 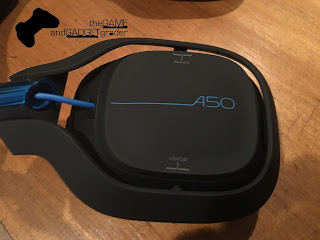 What about the problem? The 5GHz transmitter has issues with range and getting through walls. Astro claims 30 feet of range, but that is absolutely a line of sight thing. Walking into another room you will be subject to a sound drop.

Our console, base station and TV cable box are on the other side of a wall, providing a clean mounted TV look. We have had some audio drops sitting just 5-8 feet (through drywall) away from the base station. Now they are not common or that much of an issue yet, but bothersome for a $300 set.

FINAL THOUGHTS:
Astro's sound and style really give the A50 a leg up on the competition. I know its $300, but if you want the one of the best headsets available, this is a great choice. Consider your gaming setup as well. With an included 3ft USB cable to connect the base station to the console, you might need to move some things around or use a longer cable. Also consider where the base station will be in regard to the audio drops and signal drops.