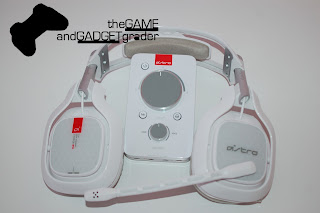 The TR, or Tournament Ready line was recently launched and with it came the A40 TR and MixAmp Pro. Skipping to the point, these are amazing. Let's dive a little deeper.

HOW DO THEY LOOK/FEEL?:
They look tough, solid and legit. Youthful words to explain that these are as nice looking headphones/headsets as we have reviewed. The lines, shapes and colors all scream gaming, tech and quality. In white the A40s are absolutely gorgeous, oh they also come in black. The MixAmp also can be white or black, you can even mix and match them. 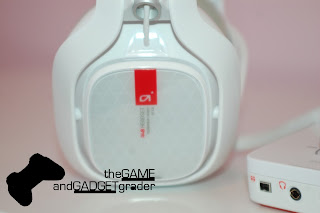 Just taking a little tour around them. The ear cups and headband are well padded and the material allows for LONG wear, truly an endurance move there. There are NO buttons on the headset themselves, all of the controls are on the MixAmp. The open back speaker tags (the outer shell of the earphone) prevent this standard model from being completely noise-cancelling, but with the right mod kit (not included), you can get closed back tags and leather cushions to make that adjustment. Out of the box though, these will block normal sound passively. In a tournament or LAN setting, that mod might be a good call.

The microphone is also detachable, something we saw in the LucidSound LS30, allowing users to use the A40s as headphones, but unlike the LS30s, the A40s ONLY work on consoles or computers so no mobile music options here. This is the only knock we have on the A40s, they aren't dynamic in the sense they can be headphones. BUT, that is not what they are for, these are hard core, professional, tournament-playing gamers. 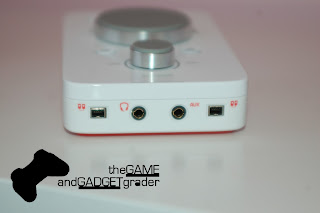 The MixAmp Pro is the brains of the operation, providing input and output points for the A40s. Its a well-built box that feels strong and features a rubber bottom to prevent slipping.

HOW DID THEY SOUND/WORK?:
Hope you have enough time, we can go all day on these. Sound is superior, both on the mic and speaker front. Clear mic like we haven't heard before and the 5.1 and 7.1 surround sound in your ears gives you an incredible advantage in position-based games like shooters or, well anything with a full sound profile.

Bass, mids and treble out of the box are mixed incredibly well but if you want to make a change you can start with four presets on the MixAmp Pro TR or move onto the ASTRO Command Center software to tune input and output sound to match your setup. The mic is amazing as well, can't explain how important that is to gaming, if your teammates sound like they are stuck in a well or inside of a can of beans, its the worst.

Rather than connecting through the headphone jack on the controller or using a USB connection on the console, the A40 TRs offer Dolby 5.1 and 7.1 surround through the digital optical port in the back of your system. That cord is then run to the MixAmp, which controls game volume, voice-to-game ratio for streaming, and comes with equalizer presets for consoles (on PC, you can use the Command Center to make changes). 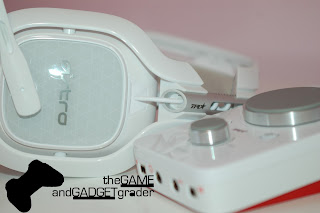 So if you are following, this is a wired headset and the connections go like this. Digital optical from console --> MixAmp Pro -->3.5 mm headphone jack --> A40 headset. All in and because of the length of the cables, you can be about 20 feet from your console. For your casual gamer, this doesn't work, hence the ability to plug into your controller or wireless options.

But for tournament ready players, the TR being wired gets rid of interference issues in LAN/tournament settings and also is the most secure way to get the best sound. And that they do on the A40 TRs. Again for casual gamers having to run extra cords across the living space to use a headset was a bit tedious.

Another negative has to do with cross consoling. The MixAmp Pro is proprietary to the system you bought it for, meaning those with multiple consoles have to get a MixAmp for each system, but can use one headset. Thats another $100+ dollars. 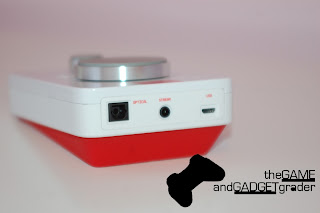 The MixAmp also has some other features beyond controlling the level of game and voice audio. It has a dedicated output for those that stream their gaming and the ability to daisy chain other MixAmps together for a LAN setup. So clearly, these are built for the new wave of E-Gaming going on these days.

They are pricey and that will keep some people away. They maybe to specialized for hardcore gamers. But they are one of the best headsets we have ever used and its great to see a refresh to the original A40s, which were amazing in their time.

These are the best sounds that have come out of a pair of Beats headphones... PERIOD. End of review. Behold, Apple's first on-ear noise-canceling headphones. Ok, we will give you more, but just know that these are not your older cousin's Beats. These are a more refined sounding, less bassy, set that can play ANYTHING well, from rap to podcasts, alternative to classical. The drivers are powerful and well rounded for all sounds. Beats is growing up as a company and are more inline with a Bose sound. Another big feature is the ANC. The headphones have a system built in that measures outside sound and sends out an opposite patterned waveform to cancel it out. With the volume all the way up on a rap song and ANC on, I was clapping as loud as I could and as close to my ear as I could and I honestly could not hear a thing. It was a trippy experience because I know I was clapping, but could not hear it at all. Now, a spoken word podcast and ANC didn't have the same effect but o

Jabra has been making a splash in the truly wireless headphones world for a couple years now. This is the Elite 75t, the company’s latest and greatest set of in-ear buds. These are more than comfy gym earbuds, they are great for all-around use too. The "best fit yet" claim from Jabra is no joke. With three sizes of ear tips in the box, you will find a great snug yet comfortable fit for your ears. They are also lighter and 20% smaller than the predecessor, Elite 65ts. The Jabra Elite 75t are some of the most comfortable in-ear headphones we’ve worn in some time. We would easily wear them for three-four hours or so with no issue. Because they are so small, the biggest issue we saw was putting them in and out and the prominence of the buttons. We would tend to accidentally press the buttons on the earbuds because they’re so small. As we got used to it, it became no problem at all. We never experienced a connection drop in the time we tested. The only time we would have connec