Jabra has been making a splash in the truly wireless headphones world for a couple years now. This is the Elite 75t, the company’s latest and greatest set of in-ear buds.
These are more than comfy gym earbuds, they are great for all-around use too.

The "best fit yet" claim from Jabra is no joke. With three sizes of ear tips in the box, you will find a great snug yet comfortable fit for your ears. They are also lighter and 20% smaller than the predecessor, Elite 65ts.

The Jabra Elite 75t are some of the most comfortable in-ear headphones we’ve worn in some time. We would easily wear them for three-four hours or so with no issue. Because they are so small, the biggest issue we saw was putting them in and out and the prominence of the buttons. We would tend to accidentally press the buttons on the earbuds because they’re so small. As we got used to it, it became no problem at all. 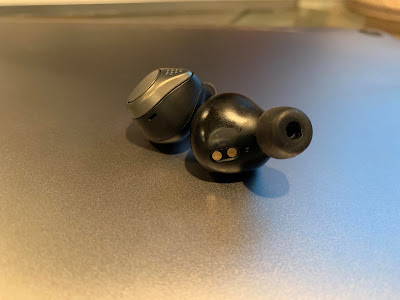 We never experienced a connection drop in the time we tested. The only time we would have connection loss is when we tried to move around the house to try out the distance. Not that you would do this, but we only saw a drop when the phone was in the basement and we were up on the top story of our house (so two stories away). Line of sight length was never an issue inside.

If you do have a drop or, our favorite feature of these style headphones, remove one of the earbuds, the phone/device will pause the song or movie you are watching on what ever platform you are using, Disney+ to Spotify to the regular music app. Put it back in and the content will continue playing. You can also listen to music with one earbud in. It has to be the right one though. Just simply restart the music once you’ve put your left headphone back in the case. 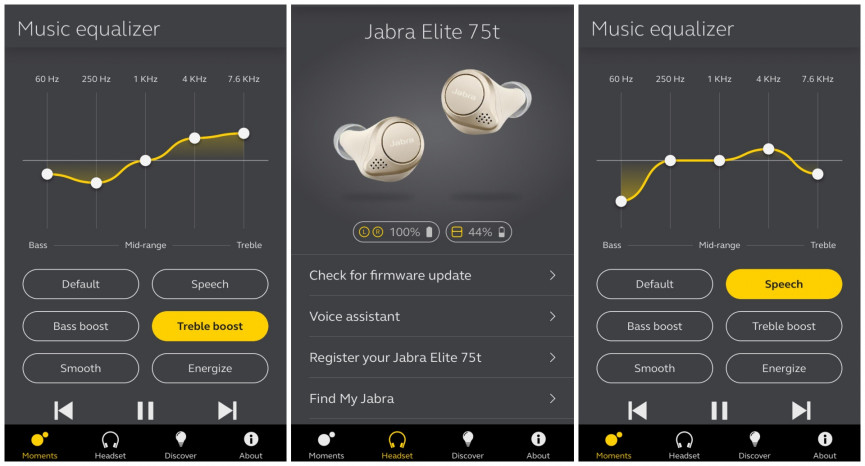 For their size, the 75ts slap. We love the bass they provide, but if you don't, this can be fixed in the Jabra Sound+ app. There are a lot of functions in the app to help you customize your sound.

Little disappointed that these don't have ANC BUT The Jabra Elite 75t earbuds adopt 4-microphone call technology, employing mic on the outside to block ambient sound and a second mic on the inside to deal with whatever leaks through, which filters out disruptive noise around you, even in noisy and windy environments.

This tech plus the fit of a PNC, we could clearly hear our music, whether we were walking around town. For those few times where you want to hear something outside (train announcements etc) there’s a ‘hear-through’ function. You simply press the left-hand button once and the microphone picks up the outside noise and allows you to hear what’s going on around you. 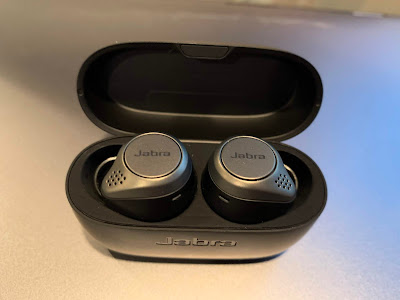 The headphones still have four microphones -- two in each earbud -- but the location has changed compared to the 65ts. There are now microphones at the front and the back of each bud. The Elite 65t worked well as a headset and this model should be just as good for making calls, if not slightly better.

Alongside the fit of these headphones, the battery life is one of the main selling points of these earbuds - it’s mightily impressive. The headphones themselves can easily last a full work day (8 hours) on a single charge and the charging case keeps them topped up for another two and a bit days. Put another way, as long as the case was fully charged, you could happily go away for the weekend without the charging cable and not have to worry until you get back.

A carrying / charging case is also included with a USB-C connection for fast charging. The case is well built, small and sleek. From empty, the headphones take just over two hours to be fully charged, though there is fast charge so you can get an hour of charge from just 15 minutes in the case.