on January 30, 2020
I, being a person who has very self destructive habits, will watch various Youtube videos and Twitch streams while going to sleep. I used to have to either get a headset with a really long cord, that would eventually wear down and fray at one end, or lay down with my head really close to the PC tower which was extremely uncomfortable and quite idiotic. 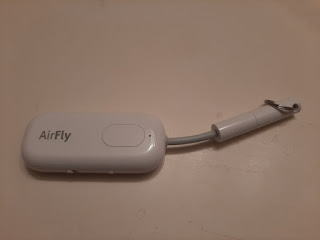 However, now that I have the AirFly Pro to work with, the only risks I have are crushing the wireless earbuds under me in my sleep or the terrible hearing loss I will experience later in life.

The best part about the AirFly Pro is it’s extremely long battery life. It supposedly can remain on for 16 hours straight, and I can attest to this. Being somebody who works an hour away from his 2nd shift factory job, I would probably go insane if I didn’t have access to music without having to camp out next to an outlet for half of my 10 hour shifts. This thing has never died on me. 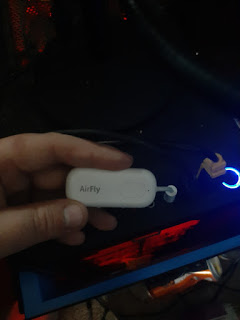 It also never messes with the audio quality in any way either. I only really noticed a dip because I walked halfway across the shop for a bathroom break and left the music at my station, which is to be expected. But the range at which that occurred was much further than I had anticipated it to be.
Another cool feature is the seamless transition between transmitting signal and receiving signal. This means that if you’re a person who hates getting tangled up in the typical AUX cord in your car, all you need to do is plug the 3.5mm jack into the port on the console, flip the switch from “TX” to “RX” and send the Bluetooth signal from your phone to the AirFly Pro device. Once you’re done driving just flip the switch back to transmitting and you’re good to go.

You could even connect the AirFly Pro to your Nintendo Switch Console. If you’re like me and like to play Smash, Pokemon, and Breath of the Wild at ungodly hours of the night with a roommate who’s trying to sleep, but you prefer to play docked and like to hear your game, just plug into the jack and connect your wireless earbuds. My biggest concern doing this was potential audio lag, of which I noticed almost none, which is extremely important to recognize audio queues in fighting games.

All in all the $50 price point is a little steep, but well worth it for the amount of convenience the AirFly Pro brings to the table. 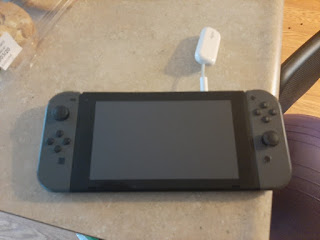