on April 30, 2018
Whole home coverage is the hot term in networking these days. As houses get bigger and data needs get more intense, network coverage right out of the box from your ISP stays the same. Mesh systems and extenders have become a mainstay for home computing. We tried the Amped Wireless Ally Plus system and here are our thoughts.

The router portion, which connects to your broadband modem, includes three Gigabit Ethernet LAN ports and a USB port (in case you want to add a USB storage device). The extender device, which looks exactly like the router, only has one Ethernet port (so, in effect, you’re getting four Ethernet LAN ports, you just have to put the fourth Ethernet device in the same room as the Extender).

Before you even plug things in, download the ALLY app, we used iOS and an iPhone Xs Max. This will then give you the step-by-step directions for installation. Big ups to that, we hate paper manuals.
The app walks you through setting up the 2.4 and 5GHz bands complete with passwords for each. Then you setup the extender, if you need it. Amped Wireless recommends putting the extender on a different floor (if you live in a multi-story home), but also about halfway between where the router is sitting and the edge of your home.
First, although it seems like a mesh system, the ALLY is actually more or less a traditional router/extender setup. However, like those wireless mesh systems, the ALLY Plus is installed via mobile app that makes setup go quicker and easier for almost anyone. In the app, which is the biggest feature in the system, there are in-depth parental controls and a security partnership with AVG which means device protection for all clients connecting through the router.

Connecting the extender is as simple as plugging it into a power outlet, you don't need to log in to the network to give it the credentials, the extender uses a proprietary signal to receive the network credentials (name and password) from the router, synchronizing everything. 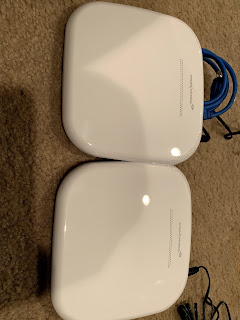 This is where we hit a snag. We could never get the extender to fully connect to the router on a floor there than the basement where the router was. We live in a two-story with a basement and all of the network "stuff" is in the basement per my wife's request.

After we put in new laminate floors we started noticing a huge drop off of wireless connectivity on the main and top floors. We thought a more rigorous router/extender setup might help, but no.

The extender has a three color light system to let you know how strong the connection is with the router. Green is 75%<, Orange is 50-75% and Red (where we are is 50% and below. So the extender might be connected at 49% or not at all, we can't tell.

BUT, and a big ole but here, our speed tests upstairs are substantially faster than we had previously, so it is working, just not sure how much better it could work.

We trimmed the cord and use Directv Now. Previously, we could not stream consistently on the bedroom Roku, but the ALLY, whether its the router or extender, has sured up the stream and we hardly have any drops and enjoy what seems to be a full HD picture.

When running the speed tests we were impressed. Right next to the router in the basement, we enjoyed a 90 Mbps or higher DL and 8 Mbps or higher UL. Based on our 100 UL and 10 DL plan, that is pretty great.

The main floor, one floor up, it was 75 DL and 5 UL and the top floor was 45 DL and 3 UL. Not a ton of fall off considering what we were coming from.

The ALLY is a huge upgrade from the ISP provided router, that is for sure. But what about the other features?

There are included and really easy to use things on the app like, website filters, app blocking functionality, with apps like Netflix, Facebook, Instagram, Snapchat, WhatsApp, Xbox Live and others – it’s a good way for parents to monitor a bunch of different apps that kids may now be using.

The app also lets you set a curfew for each profile/user, which blocks traffic access between a starting time and end time. If you forget about the curfew, there’s a big orange “Pause” button that lets you shut off access for that user (and all devices tied to that user).

The ALLY app also lets you set up a guest network (you can use its suggested name or create your own name and password) and update the router’s firmware. You can check router settings from the app too. 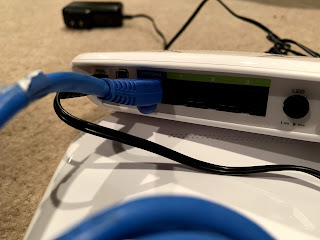 The ALLY Plus is a great upgrade to anyone's home. It is not too techie for your parent's house, but also has robust features for your house as well. Great for parents who want to monitor and limit cell phone and tablet usage from their little ones. Although the extender wasn't running at full clip in our house, it still seemed to make a big difference in our connectivity.