on August 06, 2017
Did you know that TomTom made watches? Well they actually make a few wearables for work outs and outdoors. We had the chance to try one for a sport I love to play, Golf. 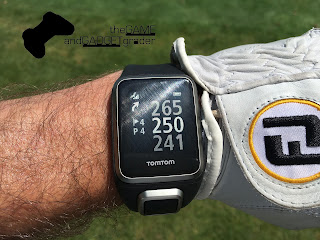 This is the second edition of the Golfer watch from TomTom and has been a ton of fun to use.

HOW DOES IT LOOK?:

The first thing you will notice on the watch is the big square button on the strap and right below the face.

That is the heart of the Golfer 2. Not only is it the home of the GPS chip, but it also the directional pad controls for the entire watch.

Frankly it doesn't take away from the watch's looks, rather I think it adds to the uniqueness of the Golfer 2. It's a bold look and with the large face, can be worn away from the course as well. I have worn it to work a dozen or some times because I love the big digits.

The Golfer 2 clasps like most watches with a rubber/silicon band that is adjustable to almost any wrist. That band is very comfortable and holds the watch snug while you swing.

Black and silver color scheme really fits the watch's size and shape. Nothing outlandish means that it can be worn with any outfit or colors.

HOW DOES IT WORK?:
I'll start by saying that three of the best rounds I have ever played were played while wearing this watch. THAT DOES NOT MEAN IT WILL BE THE CASE FOR YOU. 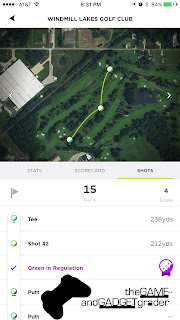 I think the reason why it worked for me is because I had more confidence in my club selection and surroundings.

The Golfer 2 tracks time playing, calories burned, the actual time as well as all of the golf data during a round. I wish the battery icon was a little more prominent and included on the time screen but it is hidden in the settings menu by hitting down on the d-pad.

When you pull up to a course, just hit the d-pad to the right when on the time screen. The Golfer 2 will search for nearby courses and should pull up the one you are standing on.

TomTom says that over 40,000 courses are loaded on the Golfer 2, but you might run into one that is not. You can first check on the TomTom site to see if it is on their list.

Once you have selected your course and are in a round the first hole will load up with a display that shows the hole number, par for that hole and data for distances to the front, middle and back of the green shown in nice big numbers.

If you click on the right d-pad the hole's layout will be displayed with distances to hazards like water and bunkers as well as distances need to layup to particular spots and the hazards around the green. 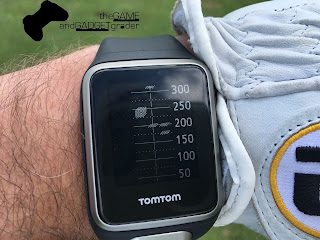 The graphics used to show the hazards aren't the flashiest and resemble '80s video games but they do the trick.

As you swing the Golfer 2 will automatically mark a shot at that location.

Apparently, the watch is supposed to only mark shots once from a location but we have had issues with a practice shot being registered and then a shot a few minutes later from the same spot being registered as well (took a swing before my partner hit, they hit and then I took my swing).

Here is where we have our biggest issue with the Golfer 2. If you do not meticulously monitor the shots being registered, it will really mess up the amazing data that you have access to post round.

For example, the Golfer 2 gave me a 500+ yard drive because it didn't register my second shot on a par five so it thought I blasted one farther than any human. 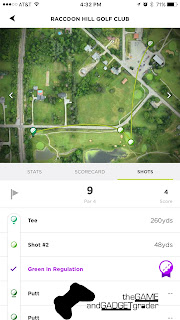 Now, you can mark shots manually by covering the watch face after your shot. You can also take away miss swings by hitting left on the d-pad within 15 seconds of the watch vibrating, which it does to acknowledge that it has registered a shot.

That is a function we often use because the watch will register shots when stretching before a shot, grabbing a club out of the bag and other times when we clearly weren't taking shots.

As you are finishing your hole, the watch will be keeping your score but you will need to manually include your puts on the score screen. 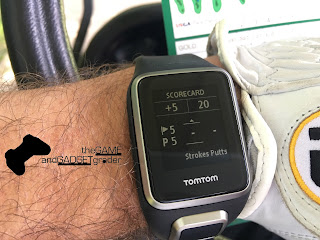 The Golfer 2 will also auto advance you to the next hole when you make it near the next tee box. That works well on some courses, but not so great on others.

The real fun comes when you finish your round and have a chance to sync with the TomTom app. From there you have access to all of the rounds logged with the Golfer 2 and scoring and shot data for each of those rounds.

When you have played a course two or more times, it will even put together a ultimate round for you, combining your best score on each hole into a lower score. 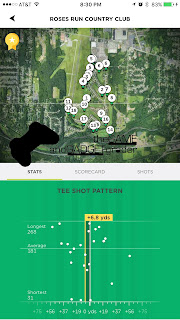 You will also get a great look at your shots on an overhead map of the course. If the data points were place properly you can relive your round.

If not it will look like you had no idea what you were doing out there. You can see a drive spray chart and your average distance.

I would love to see the addition of club tagging for each shot so it will track your average distance per club and even suggest a club to use. That would make the Golfer 2 the ultimate caddy as well.

It's not perfect for tracking the data but it gives you a scorecard on your wrist and a great overview of the hole in front of you. That confidence has really done wonders for me.