on June 14, 2017
Don't look at the price, just know this will be the last router you will ever buy (maybe). The Nighthawk X10 AD7200 Smart WiFi Router from Netgear is an 802.11ad router. It is designed to shine in large homes and is stacked with features including Multi-User Multiple Input, Multiple Output (MU-MIMO) data streaming, 60GHz 802.11ad networking as well as 160MHz Wi-Fi tech and a 10G SPF+ LAN port. 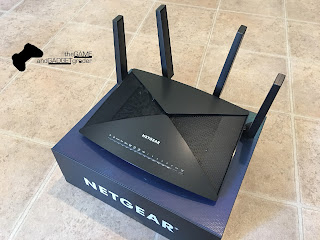 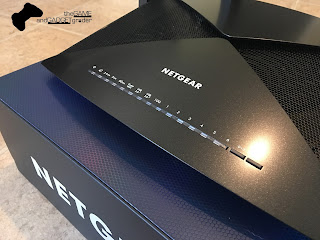 The biggest draw here is the 802.11ad, which is a special wireless that is FAST but meant for shorter distances, open spaces and line of site as it does not go through walls or objects. If you house is setup that way or have a room that it can work in, you can really get some incredible results.

The X10 also has a built-in Plex server and can stream high-def content all on its own, without NAS. A fast USB storage device like a hard drive or flash drive is needed to be plugged into the X10 to stream movies.

This is possible because the X10 has an Annapurna 1.7GHz quad-core SoC built for transcoding 4k video.

On the back of the router there’s six Gigabit LAN ports, one WAN port, a 10G LAN port, and there are two USB 3.0 ports on the side. The front of the router has an array of white LEDs to show connected devices and activity. 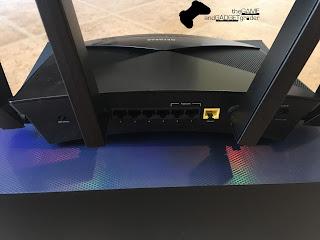 The Nighhawk X10 is quite big and features four adjustable antennas, which contain blue LEDs that light up when active, tons of lights on the front for power, internet, 2.4GHz, 5GHz, and 60GHz radio bands, guest networks, six Gigabit LAN ports, a 10G SPF+ LAN port, and two USB ports.

Also along the front is the all important WPS button and Wi-Fi On/Off button.

Like the other Nighthawk routers, the X10 uses the Netgear “Genie” app to configure the router’s settings. The desktop version of Genie is full-featured and easy to navigate. The Mobile app version is also a nice touch that is easy to use. The design of the app leaves a lot to be desired but it does the trick.

The AD7200 is amazing. It delivers in all cases including blistering speeds in the 802.11ad realm. At about $450 the Nighthawk X10 can look like a daunting purchase but if home networking is a challenge you would like to really tackle and you want to get the most out of your space and download/upload speeds from your service provider, the AD7200 gives you every available piece of tech to attack it with. I mean this thing has a 1.7GHz Quad-Core Processor for god sakes.