on April 23, 2017
Robotic vacuums are either a sign of our society's success or the beginning of the end for us all. Ok just kidding and didn't mean to go all iRobot on you.  There is a huge market of robotic vacs on there and we had a chance to try one of the top-of-the-line units, the Botvac D3 from Neato.

As an overview, the Neato Botvac D3 boasts long battery life, powerful suction and quick responding sensors that keep the vacuum on track for a noticeably cleaner room. It also features an app that allows you to start the vac or schedule cleanings without getting up, because after all that is why you bought a robot vacuum right? The app and D3 connect wirelessly upon first setup and will maintain that connection unless you do something to stop it. The D3 is fully integrated to Google Home, Amazon Alexa and Neato Chatbot for Facebook as well, giving you many other ways to us it in your automated home.

One of the most impressive features of the D3 is its ability to sense objects in its path. It can quickly divert itself away from obstructions to keep from knocking into things or accidentally trying to suck up things that it shouldn't. This process plays out as it learns your rooms and spaces it is assigned to clean.

In using other robo vacs we can report that the D3 is the most agile and efficient in its movements. It will trace the outside of the space and work its way in. That approach allows it to learn as it goes and is thus quicker in its movements than other bots that seemingly bounce around the room in a ping pong fashion.

With two settings, whole house and spot cleaning, the D3 will either do the heavy-duty dirty work or just clean up that small mess you made.

If you want to maximize battery life though, its best to pick up small objects before running the D3 or else it will exhaust itself trying to maneuver around them. It will also take up a lot more time. Once the D3 is familiar with the room, you will notice it start to make a back and fourth path for itself. 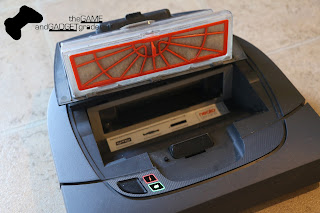 That helps to efficiently clean the entire room, rather than bouncing around aimlessly like some other vacuums we have tried. It also leaves nice vacuum tracks on carpeted floors for a tidy look.

Occasionally it does get stuck on plush rugs, socks, long curtains and stuffed animals. It will stop and beep to let you know that it's stuck. Make sure you take a look at the rooms you want it to clean and remove any smaller objects so they don't hold up the process.

The D3 also has a drop sensor which will stop it short of tumbling
down stairs or other high places.

Another nice feature is its angled and squared front. This allows the D3 to hit corners and drive along walls easier. Its height is also a benefit as it can also easily get itself in and out of tight areas, under beds and in places where your regular vacuum wouldn't fit.

With borderline off-roading wheels on it and the ability to hoist itself up as a means to avoid objects, the D3 is one of the most versatile and precise robo vacs around.

The D3 seems to have a long battery that is capable of doing several rooms with maximum power. When it starts to slow down it will send itself back to the charging station and once fully recharged, will remember where it left off and finish the job. 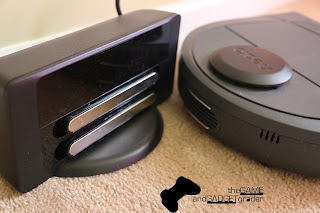 It has a decent-sized dust bin and powerful suction and you can hear crumbs and dirt being sucked up.

It won't pick up heavy objects such as whole pieces of dog food or cereal on the floor but it's great for pet hair, dust and crumbs. It works best if you empty the dust bin regularly.

It doesn't replace traditional vacuuming because of the size of the dust bin and power of the suction, but we have cut down on how much we have to drag out the big vacuum each week.

We also like that the motor on the D3 is very quiet, so we can run it while watching TV or when the baby naps. 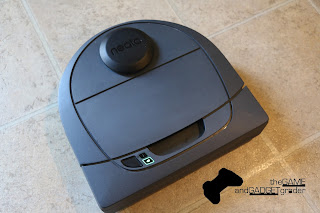 It is on the pricer side, but the Neato Botvac D3 has smarter features and is more powerful than cheaper options we have tried. With a great app experience and an intelligent brain that makes cleaning faster and lazier, the D3 is a good option as the cheapest ($399) Neato wi-fi enabled Botvac in the line.