What is Imprint X? Imprint X is a puzzle game played only by pressing buttons, so if you like pressing virtual buttons, and nothing els, Imprint X might be the game for you. 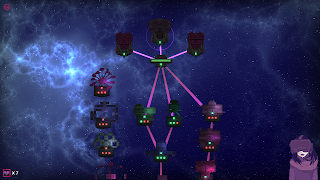 As stated above, the gameplay consists of pressing buttons in different orders to try and save the host, I think, the story is hard to follow and is never explained in anyway other than a few comic like cutscenes.

The button pressing sections are one of three, a memory game type where there's no clear indication of which buttons to press and when, so you just press them randomly and try and remember the order after you die. 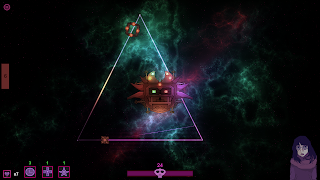 The second type is where little lights flash quickly in a certain order which tells you what order to press the buttons. The final type, which are considered boss battles, are a quick time event style where you are pressing buttons at a certain time and place as they move through space.

Visuals:
The characters themselves look like they are straight out of a sketch book, but the actual levels look more like an indie game platformer. The space environment in the background however, is very vibrant and the motions are captivating. Overall Imprint X is a very beautiful game. 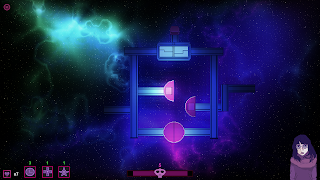 While there is not much in the form of sound effects, that is made up for with a wonderful soundtrack, that paired with the space environment is an excellent mash up of stunning visual and great music.

Final Verdict
Overall Imprint X was a good way to kill some time. I recommend this game on Mobile vs on PC simply because it is mostly great a killing a few minutes here and there, I couldn't see actually sitting down for a full gaming session of Imprint.