on May 11, 2016
We got the Monbaby as a way to monitor our newborn and give us a piece of mind while we were sleeping. 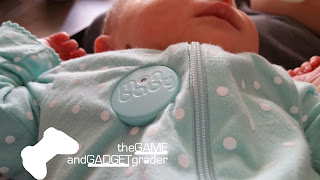 We liked the fact that it connects to her sleeper or onsie so we don't have to keep taking it on and off with every diaper change. It's light weight and doesn't seem to bother her when she's wearing it.

The app was easy to install and worked on my iPhone and my husband's android. It doesn't have a ton of bells and whistles but it provides breathing movement and lets you know if she's sleeping on her back or if she has rolled over. Those were the most important things we were looking for. It also gives "activity percentage" which shows an increase if she was starting to get fussy or move around a lot. 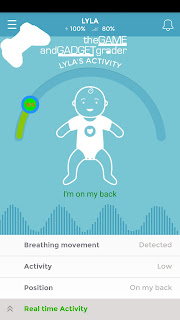 The biggest issue that we had was that it doesn't have a long range and will disconnect if you move to a different room. It's great if your baby is sleeping in a bassinet right next to your bed. We were also hoping to use it when we transition our daughter to her crib in her own room but it disconnects as soon as you walk a few feet away from your baby. 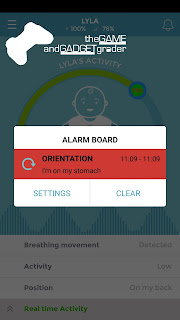 The app would also disconnect anytime we opened another app on our phones. When the app disconnects it has to recalibrate and it seems like it took a long time for it to reset itself.

We also wish there was an easier way to turn it off when it's not in use. Since there is no "off" button, you have to take out the battery to preserve the battery life.

I would also set off the false alarm when I was breastfeeding/ burping our baby so I wish there was a way I could temporarily pause it when she was awake.

Overall, it's a good product if you want an extra little piece of mind at night with your newborn.