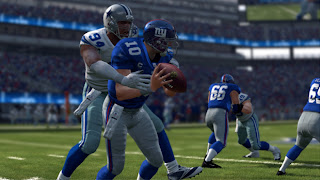 Madden really needed a boost. It had fought off competitors for a few years now. Ever since killing the 2k franchise in 2005, Madden has rested on its monopoly and put out what many people considered $60 roster updates. For the past few years there have been substancial upgrades like the addition of my personal favorite the Ultimate Team, a cross between two hugely successful elements in card collecting and fantasy football. This year was the addition that makes Madden a must have, an entirely new physics engine, finally!

The "Infinity Engine," as EA calls it is the driver behind this big change. Its still football, Madden football to be exact, but now players react to what happens around them, instead of just going through the motions of an animation because Madden decided that's what should happen when two guys end up in that particular position. 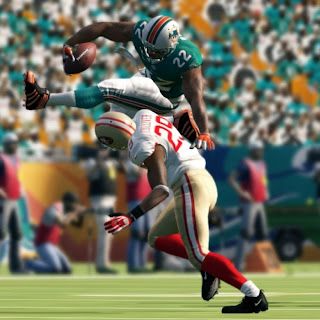 EA claims that now no two situations, tackles, jukes, etc... will look the or feel the same. We have spent plenty of time playing now, and that is dead on. It keeps the game fresh. Adds a bit more technique and strategy to playing. It makes running more fluid, contact more fierce and it feel more like the real thing instead of canned and predetermined actions based on ratings.

Players will get stick up in the offensive line, multiple defenders will actually be able to lay a hit on a ball carrier and you will know and feel when you line up a good hit. I was a huge fan of Backbreaker's physics. The game lacked depth but the physics peaked my interest because I knew that was the next step in games like this. Glad Madden could add that to its already deep package.

The Infinity Engine does have its quirks, some that almost make the engine almost a negative. Players will trip over each other after the whistle blows, run into the back of their o-lineman and fall backwards and after a tackle roll around on the ground on top of each other in such a way that the ESRB almost would need to reconsider the rating. It really bothered me in the beginning, but the good outweighs the bad in that regard. Its a "give it another year and it will be fine" feel for me. 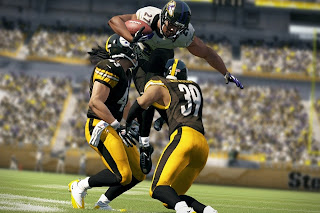 In its heart it is still Madden. The game plays almost the same way as years past. There is more emphasis on touch passing and leading receivers to give you that extra authentic feel. DBs still pick off a few too many passes (I nabbed 11 online yesterday) but that also might have been the competition.

As I mentioned, MUT is back with no wholesale changes. Different collections
and an added reserve card area for your excess and "save for later use" player cards. Ultimate Team allows you to collect cards for players, coaches, uniforms, stadiums and contracts and field a team both online and off. You gain coins by playing against others or the computer and use those coins to buy more cards for better players. A new and longer lasting way to play as opposed to using the Packers online all of the time! 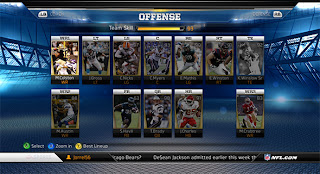 The big addition is Connected Careers which is a combination of franchise and superstar modes (which are now gone) where you take on the role of a pre existing or new player or coach and work them into stardom or failure. The connected part means that the feature is connected in two ways, first within your system and in other modes but secondly allowing up to 32 friends to play in their own universe, as either the superstar players or created players or as coaches, and to “retire” and jump to or create another player or coach without restarting if they become bored. 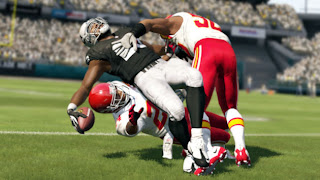 Everything is based around "XP" which is used to upgrade players or bolstering their coach's abilities to resign or draft position players. Users get points by completing weekly and season goals or successfully executing gameplay scenarios in Practice.

Presentation wise EA added a virtual Twitter wall for the connected careers where experts like Adam Schefter document your league week by week, tweeting rumors and news and gives incredible life to make the game more unique and informative. 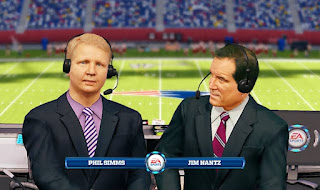 Finally, the broadcast crew is always a major point of contention and emphasis depending on who you talk to. Gus Johnson was too much last year, especially with is canned and repetitious phrases. This year, behold Jim Nantz and Phill Simms who actually work together a lot in real life. And that chemistry shows.

What I really love about the approach here is that EA seemed to tell them to ad-lib a lot more than ever before. Phil and Jim will actually misspeak or get caught up in their words and wont sound so robotic and predetermined. A small addition that pays big dividends to keeping games fresh and making things feel different each time out. 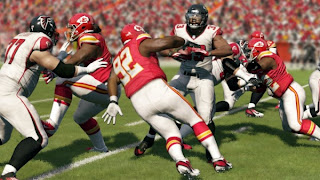 Overall this was the shot in the arm that EA needed for Madden. Huge overhaul in presentation in the form of uptempo game intros featuring star players, to the Twitter wall in careers to the broadcast team. Better graphical overlays that make it feel a few steps closer to an actual TV broadcast. The physics engine is a homerun try for the franchise. We will see how it develops and if the small yet largely awkward parts are fixed.

CONS:
- Physics engine sometimes acts up and you get some weird player interactions