it isn't often that you an actually review a product while using it live. Other than an actual computer or laptop, I can't think of too many products that lend themselves to being both a live demonstration and a live tool at the same time.

The 2-In-1 Bluetooth Keyboard & Stand for the iPad is one such opportunity. 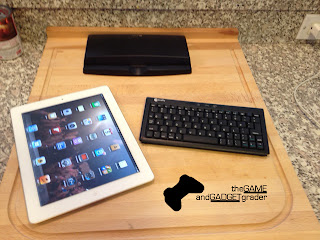 For those missing the tactile joy of a standard desktop keyboard, this portable combination iPad stand and Bluetooth keyboard might be for you. For those with large fingers, the 2-In-1 takes some getting used to, but is more than serviceable. For those more acquainted with Apple's own Bluetooth keyboard - like me - this Macally product will take a little more getting used it. If you like the iPad's touch screen keyboard, well stop reading because you're opinion isn't going to get changed. 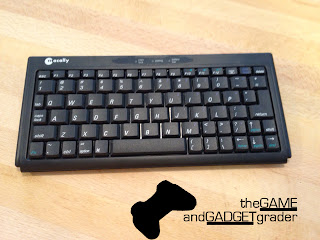 Let's talk about the keyboard. Basically it looks and sounds like a Dell PC desktop keyboard from about seven years ago. You know, that rattly and hollow plastic sound. And it feels about the same....only much smaller. Maybe a third of the size of such a PC keyboard.

With such shrinkage comes a few character key changes that those of us who have spent 30 years in front of some type of keyboard would find alarming. Quote marks, for instance, were moved. Brackets are not in their familiar place. And the Delete key, which you will use a lot, is very, very small. 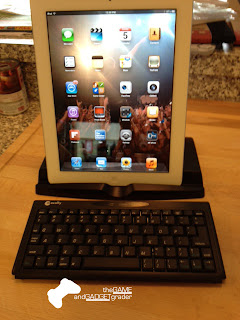 Over time, you will get used to the keyboard, as you might with any, so none of these key placement issues are deal breakers. What is a HUGE problem is the uncontrollable doubling of letters. Seems that the keyboard is extra touchy, so you could try to type "as" and end up with an embarrassing alternative. It is VERY annoying, and will lead to you wearing the word "Delete"right off that way-too-small key. 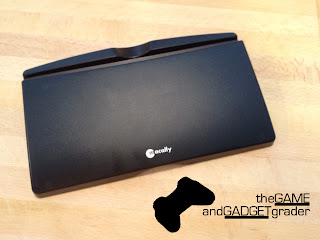 Otherwise, it took nothing but a brief glance at the instructions to pair the keyboard to my iPad2. The keyboard's Bluetooth 2.3 wireless technology provides wireless control up to about 33 feet. Not that you could read your iPad from that far, but that probably equates to a solid connection at less than two feet. 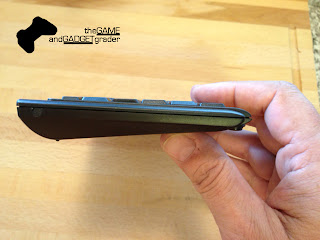 The unit is lightweight and relatively thin, and isn't likely to confuse most people working at TSA airport security stations. So it will slide easily into your backpack or other carry-on. And you could use it on the tray tables of most airliners.

The smoke-colored cover doubles as an iPad stand for both portrait an landscape viewing. The viewing angle little too upright for my tastes but I'm a little tall. Otherwise it does an adequate job.

The package says the unit features
something called "enhanced scissor-key switches for thing keycaps with sensitive and responsive touch." I have no idea; I'm not in the keyboard business. If they mean "key are too sensitive so you will often get double letters," then I get it.

Cons:
•   Tight keyboard tough for those with big fingers
•   Odd doubling of characters is VERY annoying
•   Replacement of keys disconcerting to veteran typists