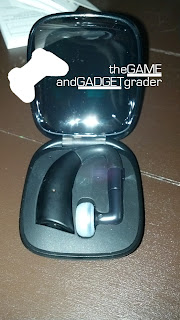 We will be on a run of Bluetooth accessory reviews here for a little as the holiday season seemed to yield plenty of them. First up is the Motorola Elite Silver, and what they claim is the "World's Most Advanced Wireless Headset with Bluetooth."

Lets start with what this device has out of the box. First off it comes with what Moto calls "HD Audio Plus with true wideband audio and CrystalTalk™ dual-mic technology." We didn't notice this dual-mic tech, the calls sounded distant and as if the voice, if this person was in the car or other smaller space, would be bouncing off the wall or dashboard around them.

This is because the mic is back near your ear. Not many companies have been able to master that quite yet. Your voice isn't a boomarang, it wont wrap around your head to your ears without bouncing around the environment first.

This also gave way to some environmental noises because the mic was fully exposed. It was not too bad, the CrystalTalk noise-canceling fairies did a good job of singling out your voice and deadening the traffic, or other ambient noise.

The Droid Bionic that we used to review the headset lacks NFC technology, where newer phones like the Galaxy S2 Epic Touch has it. This tech allows you to basically tap the headset to the phone and it will pair, rather than using Bluetooth to scan for devices and etc... Sounds like a move in the right direction, we just can't comment on the ease of use.

Motorola also claims an extended Bluetooth Broadcast range of 300 feet. Keep in mind that is with NO barriers, like walls, and especially metal. They are not too many cases where you will push that range of this feature to the limit, but I placed the phone on the main floor of my ranch style house, and was able to trek the entire space, including the basement with little interruption.  The streaming of music to the device became choppy and would seize when we were in the basement.

Like other Motorola devices like the Roadster that we reviewed, this one includes the My MotoSpeak software that allows you to hear incoming messages, speak outgoing texts and send without ever touching your phone. Once again this is a great addition to the device, really wish it was able to dictate emails and other messages, but I will take texts. You again will need to talk slowly to this one, but it really does recognize almost all of your words. It is available as a download on the iTunes App Store and Android Marketplace... for FREE.

We really put it to the test for the battery because we knew that you had to have a good idea when dealing with a headset like this. This is because the headset CANNOT be charged without its charging case, seen above. So if you leave the house without a full charge or that case, you can be left without a headset. Which, in my opinion is a terrible call by Moto. Most headsets are the extremely common microUSB, this one is not, although the case uses a microUSB, the headset can only charge when it is in the case. Now the case itself has a battery, which can then charge the device, but the key here is REMEMBER YOUR CASE, a hassle in this day in age.

Now for the numbers, with a full charge, used three hours to streaming a basketball (radio broadcast) on my phone while cruising the mall, made some phone calls ont he way back to once again test the audio quality and left in on and paired to the phone for until the battery needed charging again. That in total was 12 hours, out of the case and connected to the phone. Not bad, but again make sure you are on a full charge when you leave, because you never want to be left without a headset, especially in a state that requires them. 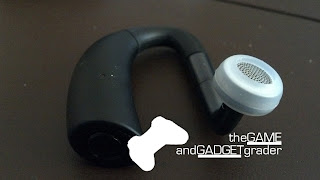 And then finally, my biggest issue here, enough to take some serious points off. It can be unbearably uncomfortable to some people, no matter the ear gel size. For me it was not the ear gel, it was the size of the piece that goes behind your ear. It pressed again my head and pushed my ear out, so that it 1.) hurt and 2.) looked ridiculous. The headset itself is small yes, but when it pushes my ear out like that, the claim that it "can barely be seen when worn" thing is out the window. Now, another one of our writers wore it and, although it took some getting used to, it didn't bother them the same. So once, again, like many headsets, shape and size matters.

PROS:
+ Small
+ Pairs and connects quickly and easily
+ Battery life
+ Speaker is nice and balanced
+ My MotoSpeak is great