on October 01, 2011
Your probably thinking... finally the review is out. Well, we spent some quality time. QUALITY TIME.
I will go out on a limb and say this is the smoothest, most realistic Madden game EVER. There review is done... Well not so fast 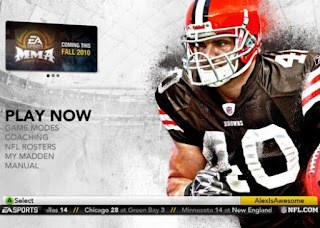 First off as a Browns fan, this edition is worth buying anyway. You will not see another Cleveland sports figure on the cover of a video game. EVER. But besides that, here we go.


GRAPHICS:
Again, this is the best looking Madden yet. Player models are amazing likenesses of the real players. Shadows, grass stains and sideline activity all continue to look good while not taking away from the on-field product. Movement is really smooth and clipping and players running through each other is slowly being phased out by EA. They almost have a perfect graphical product.


Over the last couple of years, something has really gotten into EA and their animations and graphics have really taken great leaps and bounds, seemingly coming to an apex with 12. 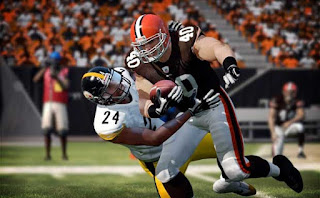 GAMEPLAY:
Animations and gameplay I feel are the true champion here. 12 really shines with collisions and player interaction. EA has been saying for years that the unbreakable animation sequences we gone, well they have TRUELY finally done it. You can tackle a player whenever you like. This makes gang tackles and running the ball a whole lot of fun. It feels more like a football sim and less like a crap shoot arcade game.

There also is better interaction between players, especially during celebrations. The excitement along the sidelines after a score is way better than any other Madden ever.


There is not a whole lot else to note as a change from 11 except for a revamped Gameplan system that allows you to choose from plays that are either more aggressive or conservative based on your liking.


Movement is true. The players react to your controls a lot more smoothly than before. This is really noticeable online where opponents can't do odd jerky movements to "cheat" their way to a win. I have always loved controlling the defensive line and this year's Madden really gives me great satisfaction and a uniqueness of contact every snap. 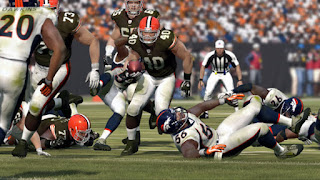 At this point I feel like I am just gushing about the game. I really love it except for one fairly large issue. The broadcast/ commentary is just plan unexceptable. Gus Johnson's canned sayings from last year and referring to players by their number is just not going to cut it. I played an entire game with the Browns and he would refuse to call Colt McCoy by his name, just calling him "the quarterback." That is god awful and annoying. Its the NFL, you have the license for the players' names, USE IT.
Back to the positives, the Ultimate Team mode continues to give me a reason to keep playing. A blend of online Madden and fantasy football is heaven for me and with some tweaks to the mode including, elongating the contracts of players and adding the ability to trade cards with others were welcome changes.
Online is still online, but they have added communities, like clans but with others that play under a set of house rules. Its basically a chance for you to make sure you are playing with people that don't cheat.
There is not much wrong with this one. It has been one of the most enjoyable Madden experiences I have ever had and I have played them all. It seems like each new Madden becomes the best Madden. But someone seems to have let EA on the secret that the Maddens from 2008-2011 were lazy at best. This one seems to bring them back into the forefront so 2k5 fan boys can stop talking smack about the greatest video game franchise of all time.
GRADE:
A+