on July 20, 2011
Bluetooth headsets and headphones have come a long way. There are many parts to the technology that can quickly derail a companies attempt to break into the market. Stream distance, sound quality, build and style not to mention price. Lets see what Plantronics has up their sleeve with the Backbeat 903+s. 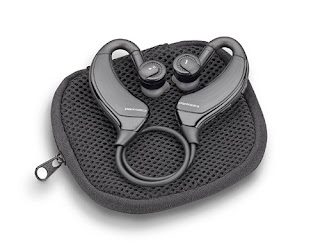 Featuring Altec Lansing sound technology and a dual-mic AudioIQ® noise-canceling setup the 903+s are ideal for iPhones and other bluetooth enabled phones, allowing you to switch from call to music with ease. After Plantronics sold AL, they released the answer to the 903, the 903+ by upgrading to Bluetooth version 2.1, with new features that include voice alerts, a visual battery indicator when paired with an iPhone. Like the BackBeat 903, the 903+ supports the AVRCP Bluetooth profile that lets the headset act as a remote when paired with an AVRCP-compatible device. iPhones and iPod Touches allow these functions, so you can now easily use these devices with the BackBeat 903+.

DESIGN:
Other than the mesh bag above, which is unfortunately unsightly, the 903+s aren't too bad to look at on or off your head. No style or design awards will be won here, its about function and fit.
Plantronics touts all-day comfort, but not for me. As you have probably seen in other reviews, my ears must be the most awkwardly-shaped pair in the world and these never felt like they were in all of the way. Its that annoying feeling that they can fall out at anytime. Its subtle but enough for me to fidget with them often. After a little work, I got the telescoping earpieces to fit okay enough for me not to always want to jam them into my ear. I wore them for two hours straight and when I finally took them off they hurt a little bit. Nothing too bad, but that again, could just be me.
On the earpieces you have controls to adjust volume, answer calls and mute. Here is where an issue arises. The buttons for call controls (answer, end and voice calling) are on the left earpiece that goes into the ear and the play/pause controls are on the right earpiece. Now the volume and track controls are split between two buttons along the top of the left piece near the power button. Here is the best image to explain it. 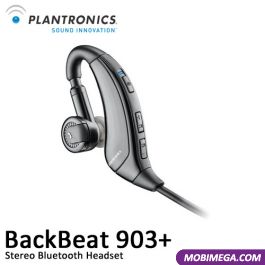 That makes track changing and volume control difficult at times. You will get the hang of it, but it will seem odd. Separating those would have helped and changing the volume to a dial of some kind would be nice too. Also, in my constant fight with the fit and because the call controls button is where it is (look above) I did hang up on too many people while getting used to the headset.
The wire that connects both pieces is flexible enough that it doesn't restrict movement but seems strong enough for this set to take a beating. Durability will be required for these to remain in the market, they are so perfect for working out, sweating and just using them without even noticing they are there.


HOW DO THEY WORK?:
I used them while cutting the grass as the main test. I figured it makes sense and is a common and ideal usage of bluetooth headsets. So, using an iPod Touch 3rd Gen, I paired them in no time. Like most bluetooth devices you press and hold down the power button to power on and keep holding on to put into pair mode. Simple.


Cutting the grass and streaming some audio on Wi-Fi was great. I put the iPod down and finally could get it out of my pocket where I would one day surely drop it and run it over. There wasn't enough range to do the front and back with the iPod in the same spot, just merely grab it and reposition as you change yards.


Now this is a sweat laden activity, but these babies are built for your perspiring head. There are ribbed channels (I guess thats what they are for) along the backside of each ear piece to help wick sweat away.


As for the streaming, I did another test using a Blackberry Bold I was able to get 35 feet around my house and into my front yard with absolutely no loss of quality, none. The headset actually didn't lose quality it just stopped streaming when it hit the 35 foot wall. That, to me is pretty incredible for such a light weight and relatively inexpensive set. 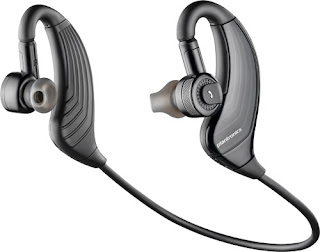 Ok, how about sound quality. Its a $100 set in which most of that price is in the bluetooth tech. But, before you close your browser and pass on these realize that the use of Altec Lansing tech in these saves the deal. Mids are great for the price point, you won't get a ton of bass support although Plantronics says there is a Bass Boost to the audio. Ehh, its ok but the music is so clear it is great. Bass also isn't something I think these need to brag about. I am a bass fiend, when I spring for expensive cans they better POUND. But these don't need it, everything is a great mix relying a lot on the mids and highs.


And then, the pleasant surprise comes. I have fallen in love with my Blue Any Q2 because of its battery life and sound quality. They are not even meant to be compared with the Blue Ant mic quality (on paper) superior. The first call I made, I switched from the Q2 to these during the call and the person I was on the phone with said they were glad I finally got off of the headset, when in fact I just switched to the 903s. They were in disbelief, as was I, that these sounded as good as they did. "It sounds like the phone is right up to your mouth."


And just like the music, the call listen quality was also great. They also get quite loud which is a great help. As for battery life it lasted about six hours of continuous music playback and talk time, and a week of standby time. It comes with a micro USB wall charger plus an ugly mesh storage pouch. The wall charger is quick, charging the device from E to F in about an hour and a half.


The controls for changing tracks is a little different than most. Rather than a double press of a button to track forward and three to track back, Plantronics goes with a press and hold of the buttons to skip forward and back, both being on different buttons as seek above. Not a huge fan of this because it takes to long to move through tracks because I have music ADD. The device does give you a spoken "Track Forward" or "Track Backward" in your ear to let you know what you have done.


FINAL THOUGHTS:
Want a set of headphones/headset that you can wear in tons of situations? Working out, around the house, airport, driving, cutting the grass, running/walking, these will be there for you. Sound quality, mic quality and diversity put these ahead of many. And that price compared to others, should put it way up there.


CONS:
- Feels weird to wear and will hurt after a while
- I always have a fit problem!
- Changing tracks isn't a positive, but its not really a negative I just didn't like the process