on July 25, 2011
We’re going to do something different here and review four products at one time. Macally was kind enough to send four iPad2 cases for us to check out, and instead on dragging it out endlessly with four separate reviews, we kicked the tires on these cases back-to-back-to-back-to-back.


So here is our look at Macally’s Shell Stand 2, Bookstand 2R, Bookstand Pro 2, and the Eco Stand 2.

This was a favorite. Sharp and elegant, the premium leather Shell Stand2 will pass muster in any business setting. With an iPad2, the piece is about .75-inch deep, so it stows in any briefcase quite easily. I took this on a number of trips, and even when unfolded the case doesn’t take up much room on your laptop or tray table.

The magnetic clasp took a little work; it didn’t mate easily, but once you got it all lined up it was very secure. Inside is a highly protective cover, and a hardshell back that served as the mounting surface. The knockouts were perfectly placed to access every iPad control and port. It held on iPad2 firmly, and because this mounting surface rotates 360 degrees, it was great whenever I wanted landscape or portrait mode. Speaking of which, the back folds to help create a stand, and it works in both configurations. Really, the only downer here was the clasp alignment…and a place to keep a stylus.

Some things just aren’t meant to be too complicated, and iPad cases are one of those things.  The Bookstand Pro2 wants to be a portfolio for business and an iPad2 case, and it’s only marginal at either. iPads are gaining ground as a true business tool, but it’s not there yet, so Macally may have just jumped the gun a bit. But if they want this case to make it on executive row, they have some work to do. As a case, this one will protect your iPad2, but after that…. As an iPad2 case, it is a thicker (about 1-inch) version of the Shell Stand 2, so it takes up a bit more briefcase space. 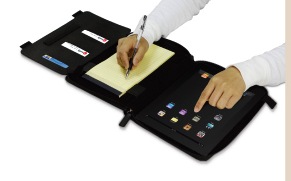 It shares the same mounting system as the Shell Stand 2, so the control knockouts are all in the right places. The mounting back also rotated a full 360 degrees for easy access to both landscape and portrait modes. Unfortunately, one needs to be a bit of an origami artist to figure out how to make the stand work properly. The case itself has a zipper closure, which is nice, but the faux leather. The pad holder is a bit cheesy, as are the slots to hold business cards. Not too many cards will fit. And I still don’t know where the supposed pen/pencil holder is, but Macally insists it’s there.

This was my little surprise and proved to be my favorite. And it was the most uncomplicated one of the four. That doesn’t make it better or worse, I just took a shine to it because it did its lone task – the on thing I wanted it to do – very, very well. The best way to describe this case is to think of Apple’s Smart Cover with a hard case back with mounts. The front cover folds the same as the Smart Cover for quick, easy use. 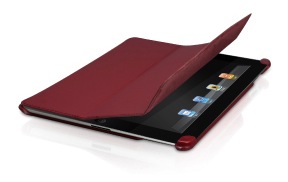 The cover also features a Smart Cover-like magnetic strip that performs the same on/off functions as the Apple version. But unlike the Smart Cover, this offers full rear coverage and protection. The interior has a nice, soft leather feel to protect against dust and scratches, and all of the connection and control slots are perfectly mated to an iPad2. Best of all, its barely thicker than an iPad2, so it fits neatly into even the briefest briefcase. I took this one on many trips and it saved space and weight while allowing easy access to my iPad2. Oh, and it protected my iPad2 investment better than an armed guard.

I didn’t get this one when it was first introduced with the first gen iPad, and I still don’t get it. But to each his or her own. Some folks will go in for the eco-friendly bamboo stand. And that is what it is…a stand. A hardshell with a magnetic ring back attaches to the back of an iPad2. The magnet mates to a round knockout on the stand. 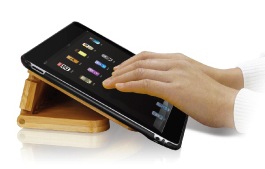 The bamboo stand itself is nice looking and is well-finished, and it folds to create portrait and landscape viewing and typing angles. But that is all it does. To me it’s like buying a table just for your car keys. Some people do that, most don’t. That doesn’t make this a bad product, it’s just not what I would look for.

Grade:  My grade is C, your grade may vary