The onslaught of iPad-specific products continues with tools designed to make working with your iPad and iPad2 that much more enjoyable.

If you are a larger person, one with biggish hands and fingers, you’ll know that poking and pointing on an iPad can be troublesome. Small radio buttons and hot-linked words are especially harsh for the fat-fingered and can only diminish the whole iPad experience.

That’s why products like the Kensington Virtuoso Screen Stylus & Pen are so handy. And that is why Kensington is one of the better Apple accessory suppliers. 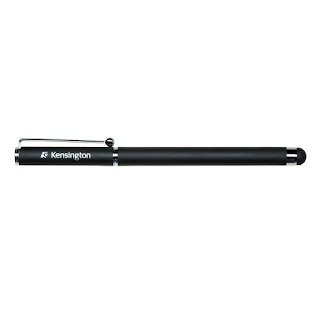 GENERAL LOOK & FEEL
There really isn’t a lot to discuss. There are no moving parts, and pretty much one model to choose from.

This particular stylus has a black silicon tip that neither scratches nor mars the iPads glass, and it has just the right amount of tackiness so that it neither slides nor adheres to much. The feel is dead on, and the iPad screen reacts just as though it was your finger doing the walking.

Kensington specifically mentions the product’s utility when operating drawing/painting/notetaking apps like SketchBook, iAnnotate and Penultimate (and quite a few others), and after exploring some of those apps there is no doubt the stylus is a lifesaver for the hamfisted. Or even those with more iPad-friendly fingers.

Yes, it does have a pen, making it that much more handy. And it has a pocket clip so that the Stylus/Pen can be held surely in your pocket or an iPad enclosure of some type. Is the open necessary? Not really, but again it gives the unit a bit more utility. Nothing wrong with that.

The Stylus/Pen is a bit slim compared to most pens I would use, but I have big hands. It is quite useable, just a bit thin. Again, nothing wrong there. Big plus is that the product includes a Parker roller ball refill. 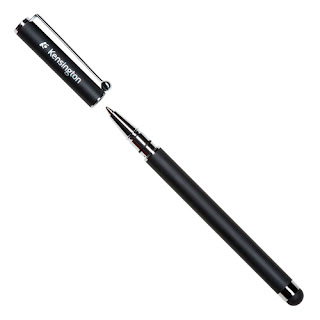 If you are like me, you will use it sometimes then tuck it quickly into your hand so that you can return to using your finger for pinching motions or to flip pages. The slightness of the Stylus/Pen aids in making a quick transition.

The fit and finish is quite nice. I have seen many iPad users rely on the good old pencil (new pencil with a new eraser) to serve as a “stylus,” and while cost effective, rubber erasers leave marks and residue on the screen. Not so this Kensington product.

WHAT KENSINGTON SAYS
• Create, annotate and capture your ideas on iPad with a
smooth touch tip

• Comfort grip is soft and durable 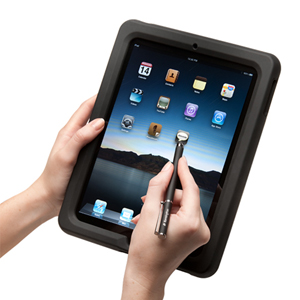 + Can be clipped to many iPad covers

GRADE:
A+ for product