on May 01, 2011
Perhaps the hottest – and certainly the coolest – new gadget is Apple’s outstanding iPad. It’s a book, a magazine, an iPod, a game console, a computer and much, much more al rolled into a lightweight 10-inch tall package. The first iPad, released in April 2010, blew everyone away; iPad2 was launched Mar. 11 of this year took it to the next level.

iPad2 also put a kink in the accessory market. Products made for iPad1 don’t necessarily work with the newer, thinner model, particularly cases – both protective and decorative.

Macally has long been synonymous with Apple products, and has been a clear leader in creating, producing and offering quality, reasonably priced Mac and Apple product accessories. I have owned and used a number of their products in the past, so there was a level of expectation when they agreed to let me test a couple of their new protective covers for the new iPad2. 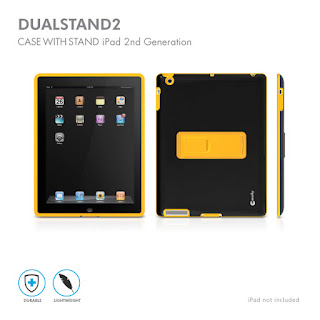 I gave both the Case With Stand and the Flexible Case With Stylus Pen (both $29.99 through Macally) a whirl for about a week each, using my iPad2 in my typical fashion. Everyone develops their own unique way of holding or otherwise using an iPad, so please keep this point in mind as you trundle through this review.

Both covers – which actually cover only the back of the unit and wrap over the edges for a secure grip – feature vivid colors. The Flexible Case With Stylus (FC) came in a hot lime green, while the Case With Stand (CS) was black with a hot orange trim.

One of the obvious problems with producing workable accessories for a product that doesn’t yet exist is knowing where various buttons or slots will be located. In this case, Macally was spot on with every opening and button. The FC featured snap-open covers to protect the earbud plug and dock connector. I was able to easily access either port, and appreciated the snap-over covers. The camera lens opening on the back was dead center in both covers’ slots.

However, my major complaint lies with the volume buttons and sleep button. For some reason Macally chose to not leave those open to the user. Instead, they covered them over with material. This proved difficult with the FC where the sleep button ended up being depressed by the cover. I had to take an Exacto knife to the cover the reveal the iPad2 button and relieve the pressure. The CS also covered the sleep and volume buttons, but that didn’t cause any problems other than being a but annoying. 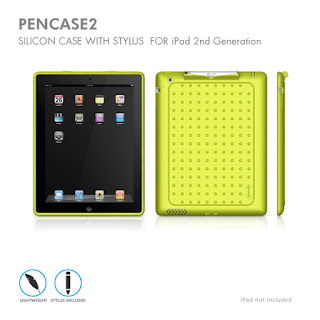 What was far more annoying was the finish on the FC. Untrimmed mold flashing not only didn’t look good, they were harsh on my fingers. One of the great aspects of an iPad is its elegance; it doesn’t look cool, it looks fantastic. May just have been the one cover sent to me, but Macally needs to work on QC.

No such problem plagued the CS, which was clean and sharp along every line. Still, the CS has a shiny back, ad the lack of tack gives one an uncomfortable feel when holding their iPad. We want a little security, and that slightly sticky feel to the FC was missing with the CS.

The bigger sin with the CS was its kickstand. If you look at Macally’s adverts for this cover, it shows a kickstand that allows the use to prob their iPad up in a portrait position or in a landscape position. One might assume that the same cover would allow both; not everyone uses their iPad to watch movies and TV shows just as not everyone uses it to do email or type product reviews. To my dismay, the kickstand on the CS I received allowed only landscape viewing. There was no ways to prop the iPad up otherwise.

Back to the FC for a moment. Included is a stylus, about the length of a golf pencil. It snaps securely into a holder located on the back of the cover and at what would be the top of the iPad in a portrait position. That holder also serves – though weakly – as a “kickstand” of sorts. With my big fingers, the stylus was a godsend, though it was none too easy to pop it out from its holder. That’s OK with me as I’d rather not lose it!

MY IMPASSIONED PLEA!!
I am not including this as a negative in this review, but I am mentioning it because these and many other similar products – make no allowance for Apple’s also very cool Smart Cover. The Smart Cover uses strong magnets to hold the folding cover in place, and the cover itself does a decent job of protecting the front glass screen from bangs and bumps.

But because of the way it attaches, there is no way to use the Smart Cover – a $39 investment (the leather version is $69) – with these – and many other – covers. I have not yet tried the obvious solution and that is to cut out a portion of the Macally covers to make them work with the Smart Cover. Frankly, I shouldn’t have to do that myself! I do know some people who have cut similar (but not Macally) covers to accomplish the same feat.

In future designs, it would be nice it Macally and other cover producers would accommodate the Smart Cover. Pretty please!?

According to Macally, here are the main features for the CS:

And for the FC:

· Functions as a protective travel case, as well as a viewing stand to improve typing and viewing comfort

· Protects your iPad from bumps and scratches


My advice, take them at their word, though temper that with some real-world experience.

PROS: + Finish was good for a mid-line cover

- FC only allowed one orientation for kickstand

- Pricing a bit high for what they are