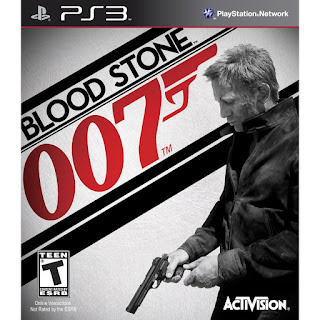 STORY:
The plot has you, doing clique Bond things, and in this case chasing biochemical terrorists across a handful of exotic locations in Europe and Asia. The graphics are great and give the settings such a pop, none better than like when you're escaping an exploding oil refinery in Siberia or chasing a giant dump truck in Bangkok. Unfortunately, the story involves a lot of walking and collecting of the hitting of switches, the five hour campaign is mostly shoot this guy and shoot that guy firefights against brainless baddies.

As stories go, this one is pretty good for other Bond games. There is a Bond girl, voiced by Joss Stone, and there is a twist. You will need to watch the lengthy cutscenes to get the full story, but the pacing and technique of the plot is quite good, and maybe the biggest plus.

GAMEPLAY:
Bloodstone is a third-person shooter that is riding on the coattails of the newly released Wii title, Goldeneye. Although this is kind of a secondary title for the James Bond franchise, there is some good stuff here. In Splinter Cell fashion, the Focus Aim feature gives you the chance to execute a one-shot kill after you take down a bad guy with a melee move. The hand-to-hand combat animations are excellent, now matter where you are in comparison to the henchman, Bond will pull off a perfectly fluid takedown move that often incorporates the environment around.

On the game's lower difficulty levels, you don't even need to use the Focus Aim, unless you just need a little change of pace from the repetitive shooting. A Call of Duty-style targeting that automatically snaps to an enemy each time you zoom in, making it easy to rack up the head shots without the need for any further assistance. But even if you move up to higher difficulty levels there still is no reason or gameplay rewards for being stealthy. Although it is easier and can break up the monotony of the shooter, it was easy to forget its existence.

The cover system is good, but sometimes you have the camera angles fighting against you as you use the it. For example, Bond will move off the cover object with the press of the X button on PS3 and the camera will jolt to an angle that is to ideal, to say the least during some of the rougher firefights.

Gunplay is pretty good. They feel powerful and accurate but man are their not enough of them. The lack of weapon variety is surprising for a Bond title. Two pistols, a sub machine gun, a couple of assault rifles, a grenade launcher and a sniper, but just a few chances to use it. That, paired with the complete lack of gadgets, is really hard to swallow for Bond fans.

The only form of gadgetry is the cheater Smartphone gadget. The Smartphone gives users a peek at the situation. Bond can see all bad guys, checkpoints and basically takes all of the guess work out of the game. It feels like it makes the game way to easy at points and at others it is absolutely necessary because the developers liked to hide the checkpoints all around the levels.

Another thing that seemed thrown in, the multiplayer. It is complete with three uninspired and generic shooter game types, Team Deathmatch, Objective and Last Man Standing. Like any other online shooter you can level up and unlock new character skins. Otherwise there are very few reasons to stick around with this multiplayer.

We will end on a positive, the driving of boats and cars was the ultimate Bond experience. These high-octane portions are standout parts of campaign. They can be really unforgiving, the driving physics are not good, and the levels are really difficult in terms of the instant deaths caused by head-on collisions and wrong turns into bodies of water. It was really hard to see anything coming and we hard a lot of trouble on these. They provided the only challenge in Bloodstone.

DESIGN:
We really felt that a lot of the exotic locales in the game were really gorgeous. The varying landscapes, like urban Bangkok and Siberia, looked great and gave Bloodstone an epic feel.

There were some rough patches of glossiness and texture issues. But overall, the environments looked good. The actor models were decent. Craig looked like Bond and M looked the part. There were some awkward movements during cutscenes, but a lot of them played out like mini movies with in the game.

The guns are hard to get a good gauge on because you don't often see them. Cars looked awesome and it didn't hurt that Aston Martin, Jaguar and the Koenigsegg CCX all made their way into the fold.

A lot of the story is encapsulated in the voice acting. Daniel Craig as Bond and Judy Dench as M, Joss Stone is Bond girl Nicole Hunter. They deliver a pretty good script.

The sounds aren't tossed into the forefront. Gun shots are muffled and the engine noises really should have been brought out more. Oh, and why is the Bond theme hardly used. I am glad they didn't beat it into the ground but man was it finally good to hear it during the final credits.

LASTING APPEAL:
Multiplayer is really thin, there in no real reason to play back through the game unless you are a trophy hunter. So the five and a half hour campaign is an afternoon's worth of fun and therefore, give it just a rent.