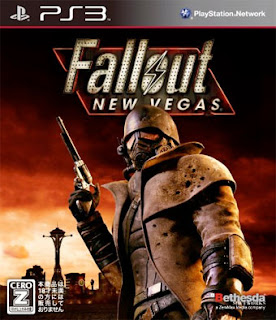 STORY:
The story in Fallout 3 was a lot more captivating for me because of all of the pre-wasteland character building and foreshadowing that happened in Vault 101. But in New Vegas, you are thrust into the west and despite a nuclear bombing, the city of Vegas managed to survive the war mostly untouched.

After the war, groups started to form and create a governmental system and called themselves the New California Republic, or NCR. Using the Hoover Dam, the NCR and citizens of New Vegas have access to clean water and power, something most areas lack. Of course, there is a group that is fighting for that power, they are called the Legion, a dictatorship lead by a man who renamed himself Caesar. They enslave and conquer surrounding areas in hopes of spreading their word and build an army to fight against the NCR.

You learn early that you are a courier with no defined background. No background makes it hard to really get connected to your character until you start to piece together the story and ultimately fulfill your duty of delivering a package to the New Vegas strip. It wouldn't be a Fallout game if things go wrong and some minor twists are used to keep things fresh. Much like its predecessor, there are three possible endings to the main quest.

DESIGN:
Things look the same. And that is for the best. The game was never meant to be the graphical beast that everyone wants in a game nowadays. With such a huge and varied landscape, for the sake of loading times and smoothness, the graphics are serviceable.

There seem to be more glitches associated with NV as apposed to 3. But keep in mind that patches are on their way and will hopefully draw NV closer to the relatively clean and smooth experience that Fallout 3 was.

Audio is also a star here. The voice acting is great. Pure and simple, this is one of the most consistently well-voiced games in our recent memory. How much does that matter? Well, with all of the story being delivered to you through the voices of the passersby that you encounter in the Mojave Desert, the better the voice acting, the better the story. NV and all Fallout games for that matter, are story heavy and having top notch voice acting really helps the Vegas Strip and the surrounding areas come alive. Matthew Perry, Danny Trejo and Kris Kristofferson all highlight the cast.

GAMEPLAY:
Again, fans of what I hold as one of the greatest games ever created, Fallout 3, will feel right at home with the controls. Everything is back, the use of the Pip Boy as a inventory organizer and map, the VATS targeting system, which stops time and allows you to target limbs and heads of baddies around the wasteland. And then damage is doled out based on the condition of your weapon, your accuracy stats and other level ups that you have acquired throughout your tenure in the Mojave as well as distance and luck. Its a great system that didn't need any changing from "3" so it was great to see it back.

Now lets talk about what is new. They added new weapons, like dynamite (which is inherently western) and an awesome new weapon modification system, the ability to use the iron sights on almost all guns. New with this are the abilities to add sights, springs and other gun parts to make the weapon more effective. But also the ability to create ammo from things around the map. This is especially important because ammo is less available (to say the least) than the abundant weaponry in "F3."

Also, it a move by Obsidian that was successful in the Elder Scrolls franchise, a plant-harvesting system was added, allowing the player to use plant in bullet and aid (for healing, stat boosting) crafting, as well as other uses.

Unlike "F3," your karma goes beyond not catching breaks along your travels. With tons of new factions jostling for supremacy in the Mojave, the developers decided to reintroduce the reputation system that was absent in Fallout 3. The degree of faction loyalty influences the player's reputation with that faction, which in turn affects the behavior of faction non-player characters toward the player and reflects the impacts of selected choices in the world. Basically, if you piss off a bunch of NCR Troops, don't be surprised if you attack you at any chance they get. (HINT: DON'T PISS OFF THE NCR) and if you do some tasks for the Legion or the NCR, they will hold you in high regard and this opens you up to their items and outposts. We really liked this feature being added because this punishes you for ransacking and pillaging your way through. It gives an added depth to the game that was missing from the last title.

Companions are back but you can get them a lot earlier in the game and they are a big help. What ever they kill gives you XP, which in turn helps you level up. Companion behavior and tasks are controlled using the new "companion wheel.", removing the need to enter conversation to give commands. The new Companion Wheel offers command execution by selecting commands that are presented in a radial and graphical menu. You are able to have one human and one non-human companion at the same time.

It wouldn't be Vegas unless you can hit the casinos to participate in mini-games, including gambling favorites like blackjack, slots and roulette. You can either win or lose money at these mini games. Also a card game called Caravan is also playable in the game, but this underground game won't be found on the Strip, look to play this overly-difficult (FOR NO REASON) card game around the disheveled towns of the desert.

The additions are welcome but still don't move the franchise forward all that much. Many reviewers us that as a reason to knock New Vegas, but we see it as capitalizing on what work so well in game that took over our lives in 2008, Fallout 3. Being able to customize guns and use plants as nourishment gives the game a more real feel.

The glitches and oddities that we have experienced, like freezes and some hardcore stuttering really effected gameplay. If this game can only become more smooth, we would give it the A is so very much deserves. But those imperfections keep the experience from being top notch. Hopefully a patch will solve all of that.

Overall the controls are great, just like its predecessor. Plan and simple, if you enjoyed Fallout 3, you won't skip a beat with New Vegas and you must try it.

LASTING APPEAL:
Its a larger version of a game that took on average 100 hours.... Need we say more. It will suck you in, so plan accordingly.

PROS:
+ It uses the formula that has worked oh so well
+ Huge landscape and tons of caves that will take a lot of your free time to explore
+ Great new weapons and foes (not just Super Mutant after Super Mutant)
+ Western feel that is perpetuated throughout the game
+ Excellent voice acting and music really set the tone

CONS:
- Still tons of glitches and freezes, this really hurts the grade!
- Seems like a DLC add on to Fallout 3, which is fine but not enough new gameplay changes to push the franchise
- A lot more difficult out of the box than "3"
- Story can be tough to follow and is not as solid as "3"