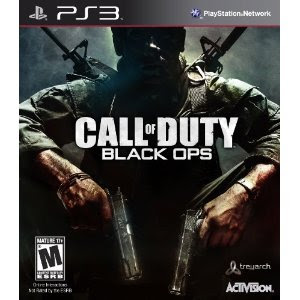 STORY:
We don't want to give a lot away here because we think that this is the best Call of Duty story yet. But, you start as Alex Mason, a soldier being interrogated for information that he doesn't remember. You play through Mason's memories in search for information. Of course there are twists, some of which work better than others, but unlike Modern Warfare 2, which had the most ridiculous story, Black Ops does a wonderful job of tying all of the loose ends for you by the end.

GAMEPLAY:
If you have ever played Call of Duty, or any shooter for that matter, you will feel right at home here. Nothing to fix, nothing to change, it worked well for each other game, so keep it the same.

There is some good variation in gameplay elements here. Some driving, shooting while riding, flying, managing troops from a Blackbird, swimming, sneaking and guns blazing. Each of these elements works together to tell that great story and none of them, like the AC-130 level (although fun) in Modern Warfare, feel thrown in and unnecessary.

There are tons of great guns. There are the faithful regulars of course, including the M16, the FAMAS, AK47 and Skorpion machine pistol, but Treyarch has also dug deep to find some awesome forgotten guns, including the box-like G11 and the powerful but slow H510 shotgun.

Enemy AI is okay. Notably the Russian spec-ops forces who roll and leap around and if they get close enough, they'll rush at you with savage speed. A break from the usual peeking-out-from-behind-cover that you see through most of the game.

The storytelling style and some of the visuals look like a cross between past Call of Duty games and some of the physiological thriller stuff from the F.E.A.R. series. Without giving away the story too much, the visuals and cutscenes are so entrancing that this single player experience is the best we have seen in some time, not just in Call of Duty.

As always, graphics are key to this genre and these don't disappoint. Like every game, some texture stuff here and there, but it is uncommon and never takes away from the experience. The varying landscapes look great. From jungle to snow, factories to underwater, everything is beyond convincing.

Guns look, sound and react really well. You can feel the power of each of the weapons in your arsenal. Plus there are so many different types and variations of the guns in the game that you won't need to just fall in love with one.

Now this is a note to the youngsters and parents, THIS GAME IS EXTREMELY VIOLENT AND GRAPHIC IN EVERY SENSE OF THE WORD. Language is rough and the blood flows pretty easily, seemingly more than any previous COD game.

LASTING APPEAL:
Our last two reviews feature games that are heavy on re-playability. COD Black Ops is the online first person shooter of the moment. There are hundreds of thousands of people online playing at any one time.

Now we have had some serious issues connecting to others in partys or games. The matchmaking and partymaking is still a huge problem, like ruin your night problem. For example, I cannot, no matter what, join a party with or host my brother in a party. We have played with router settings and everything we can think of but it wont work. So, in order to play together, we need a middle man to host the party. IT SUCKS. This problem dates back to Treyarch's last COD in World at War and it was just as big of an issue for Modern Warfare 2. In searching for an answer, we have discovered that we are not alone and this is a problem that Activision and Treyarch need to fix.

Other than that snafu, when we get into games we have enjoyed the deepest multiplayer experience to come to Call of Duty, EVER. Unlockable guns, wager matches to place the new "COD Points," which are used to buy attachments, perks and other things like killstreak rewards.

Tons of guns, a new crossbow and ballistic knife really add to the depth and range of the online experience. Zombies is back with more than just one map available. And a "Sticks and Stones" mode has you in a frantic match with just crossbows and grenades.

What they have deemed Create-a-class 2.0 is a really deep feature as well. Your gun, attachments, perks, a fully customizable clan tag and emblem and camo paint are all able to be adjusted to really give you the chance to stand apart from the pack. You can even customize your reticle's color and shape.

There is a killstreak perk to mention in the exploding RC car, which is really overpowering for just three kills to earn it. Also, for the first time in the series, clips from online gameplay can be recorded and you can show that awesome kill to your friends and the world.

Biggest gripe online other than connection issues, NO TRUE SNIPER LEVEL. Derailed in COD MW2 was a perfect sniper level. But there is not a single level that has open enough of a landscape to lend itself to be the "sniper" level. I am a big sniper, so, yeah.

There are 14 maps, designed to explore and support a range of playing styles, sans a sniper. The standouts, are "Jungle", with its winding paths, tree houses and hanging vines and the most popular online, "Nuketown", designed to resemble one of those simulated neighborhoods constructed in remote locations by the US military to test the effects of nuclear weapons. Think the beginning of the newest and worst Indiana Jones movie.

Also added is what we call "guest play." Lame name I know, but finally a Call of Duty game allows you and a friend to play split screen multiplayer against others online. Halo has been doing and now COD allows you and a friend to share a TV and play online. Also seeing its COD debut is a bot AI practice mode which gives you and a friend, online or off, the chance to practice against AI bots. You can pick the map and other settings to tune the game for you. Of course Zombies is back and really just stays the same with endless fleets of the undead to kill for your pleasure.

PROS:
+ Amazing story... the best one yet
+ Deep multiplayer that, in our eyes, is the best experience so far
+ Graphics still phenomenal
+ Excellent voice acting

CONS:
- Matchmaking and party system is still broken
- No sniper level online
- AI is still laughable at times
GRADE:
A+