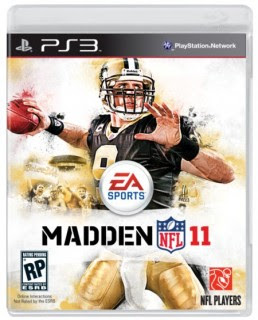 OVERVIEW:
Madden, synonymous with domination of the football video game market. But with Backbreaker posing a minimal threat, Madden starts to step away from the pack with this offering.
DESIGN:
Player models are some of the best we have seen. They move, act and look extremely lifelike and believable. Graphics are awesome too. Crowds look great and the little cut scenes in the stands are an added visual improvement. Sometimes they pregame crowd hype-up is repetitive, but it is better than past versions. 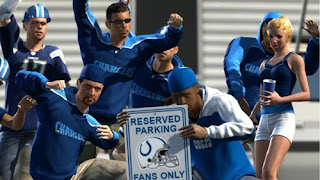 The same goes with player and in-game cut scenes. A look in the huddle or on the sidelines is a welcome addition. But play just a few games and you will have seen them all. Its a start, but runs it course quickly. There is not much else bad to say, EXCEPT FOR OUR BIGGEST PROBLEM WITH MADDEN 11.
And that is the audio. It is flat out terrible. Starting with new play-by-play guy Gus Johnson. I love Gus, but the lines and programming of audio is BAD. Gus needs to read some more lines and give different emotion. For example, he will say in extreme emotion, "The Natural, Andre Johnson" and then in passive and almost whispering voice say "was the intended receiver." It does not blend at all and sounds awful. There are many examples of that differing emotion, pace and tempo in the same sentence, too many to name. Just wait until he says numbers and scores...!
If seems that Madden 11 is more of a TV style broadcast because there will be large gaps of no commentary and then all of the sudden Johnson will chime in.
And then the audio of the crowd would be missing until a tackle or in many cases, until the opening kickoff and then all of the sudden the crowd audio would come back. WEIRD stuff in the audio department.
GAMEPLAY:
The biggest "improvement" is the addition of a new play-calling system called Game Flow, which is said to speed up games substantially. It does speed them up, but by about ten minutes in our use. Basically, the game will call plays based on the team's tendencies, situation and score. You can go really deep and assign plays to different situation, remove plays from rotation and the game plan and map out your entire plan from first and 10 to fourth and long. Its neat to tweak it, but it will take a long time to perfect.
Online, Game Flow wont speed up anything. Players still have to wait for the opponent and the online community doesn't seem to use Game Flow.
Put on a headset and feel like you are the QB as your coordinator will talk to you in the headset just like the NFL.
Complaint #1, why make things harder? The developer team took away hitting triangle to change hot routes and L1 as the D-line adjustment. Instead all of those things are confusingly mapped on the D-Pad. That makes for one extra button that needs to be hit during the frenzy before the snap.
Other than that, locomotion, the new player movement system that is based on speed, weight and angles, is great and feels lifelike. Although you will still encounter the crazy broken tackle, locomotion and the physics associated look great and provide incredible feedback.
LASTING APPEAL:
Of course... This series, since online play, has been one of the most consistently played games of all time. You will be battling people online until well after the Vince Lombardi trophy has been won. It
The new co-op Team Play online feature is one that we really loved. It finally allows you to play with others on the same team against either the computer or other players. Sounds like it would be difficult? It is, mostly getting used to switching players and the different camera angle (which is from behind you instead of in front of you), but the team work is a lot of fun. It gives you a new appreciation for defensive assignments because if you blow your coverage, it will show. Also, running routes with receivers is fun and allows for broken plays to be saved with a little foresight and practice. 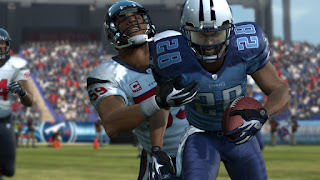 PROS:
+ Improved presentation
+ Player models are the best we have seen
+ Locomotion and animations are great

CONS:
- Audio (crowd noise cutting out and the broadcast being so weak) is terrible
- Gus Johnson needs to read some more script because his tempo and pace for some situations is way off
- Have had a lot of trouble connecting to others online
GRADE:
B+