on August 20, 2010
OVERVIEW:
Mugen Power batteries are known worldwide, they just don't have the foothold that they deserve in the US. So, eTrade Asia Ltd. sent us a 3300mAh extended battery for the Blackberry Storm 2 to try out. 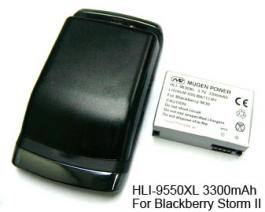 DESIGN:
Well, its big. And many people will make fun of your phone, because we are in the age of paper-thin cellphones. The battery is so thick that it requires a, included battery door to cover the hole. The battery door bump is wider than the phone itself so it more than doubles the height of the phone. That door is slightly rubberized and provides some much needed grip on the back of the Storm 2. The battery and door are also heavy and double the weight as well.
In short, the change from sleek and stylish to clunky and heavy is going to take some getting used to.
HOW DID IT WORK?
Awesome, and thank god for that. The idea is to add battery life, not be more aerodynamic. The included paperwork says to charge the phone (with the battery in obviously) for 8-12 hours before using (even if the phones says its full) to boost the capacity. Then healthy charging and usage cycles are key to maintaining the batteries health.
As with other batteries in modern devices, DO NOT MAKE A HABIT OF LETTING THE BATTERY DIE. AND DO NOT CHARGE THE DEVICE (after first charge) IF IT IS FULL.
Now because there isn't much to the battery other than how long it lasted we will break down the stats:
This is all with normal to above average everyday usage. WiFi and Bluetooth was on, a couple texts and about 50-75 emails. 10-15 average length phone calls. Bunch of texts and BBMs. Played some Word Mole and Brickbreaker. Surfed the web on the browser and streamed internet radio and watched NFL Network on the NFL Mobile app. It was all medium to heavy use. Any normal day at the office and the numbers were astounding.
OEM RIM Battery- 29 hours 43 minutes
Mugen Power Extended Battery- 85 hours and three minutes (Sunday at 11am it came off the charger and at 12:03am Thursday morning it died)
That is incredible. We hope that keeps up, and of course we will keep you up to date with more tests but so far it has been a great battery. Keep in mind that the bulky size is something that time and technology will make smaller.
MSRP:
$71.95
PROS:
+ Roughly three times the regular battery time
+ Charges fairly quickly considering the amount of additional battery time
CONS:
- Its BIG
- Not many places to find them, look on their site
THIS IS MEANT FOR...:
- Power Smartphone users that do a lot of streaming of audio or video, or hell, a lot of anything
- People who go on trips and constantly forget their chargers
GRADE
A
For doing its job, but we got so many comments about it being cosmetically, well, ugly. People are so big on slim and stylish that most might be turned off to the idea. But for those that are more about their phone working while the stylish people with slender phones are at the airport kiosks charging theirs, laugh and keep talking.