on August 01, 2010
OVERVIEW:
Monster has once again teamed up with beat master and legendary rap producer/artist Dr. Dre to further this brand of high-end headphones. Beats by Dre's newest member is the Solo HDs.

DESIGN:
This is the ONLY flaw with these headphones. After reviewing the v-moda Crossfade LPs, the design bar has been lifted. But luckily, these make it up elsewhere.

The build quality has been called into question by many people. Having your high-end headphones based in plastic is questionable, but after two weeks of play, we seem to be ok. In and out of purses, bags, around necks and other normal use hasn't been enough to break our Solo HDs.

But the "plasticy" feel is not a good representation of the price or the sound. And this, we feel, is the only place where Monster drops the ball. 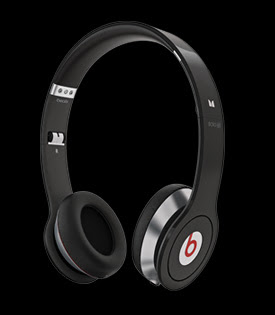 We got the Black Solo HDs with ControlTalk, priced at $229.99. The black is such a good look because the red and white accents really look good. But the overall look of the headphones is not on par with headphones that focus on style like the CrossFades do. Enough of that comparison, because we will better compare the two soon.

A simple shake of the Solo HDs yields a plastic, loose sound and feeling. This has a lot to do with the added functionality of the Solo HDs. Because they fold down, the arms feel a little loose because of the hinge by which the HDs fold. Also, because they use passive sound isolation, the earcups need to form around your ear. This feature means that the cups need to be loose to better form around your head. That is where most of the noise and "cheap" feel comes from, so because its part of the sound quality, this is forgivable for sure.

Again, these are graced with an attention grabbing high-gloss finish that is also scratch resistant. After normal and continuous use, that scratch-resistant promise was pretty on point.

Comfort wise, these are comfy. We prefer bigger earcups for added comfort, but these were pretty darn good. The bridge has some great padding and the arms don't press on the sides of your head and cause pain. Overall, a pretty great fit and that is just as key as anything.

HOW DID THEY WORK/SOUND?
Great! We couldn't find a genre of music that didn't excel with the Solo HDs. Live, spoken word, rap (of course) alternative, rock, anything was great. The mids were crystal clear and better than any we have tested. Bass was exactly as we would have expected - awesome. Highs were, to some people, not as powerful or clear as they would have wanted, but those who like bassy music tend to rely on great mids, and these deliver. I felt that the highs and bass worked so well together that it wasn't that the highs were weak, it was that it was smooth and balanced sound.

Listening to high-end cans makes you realize how poor the quality of some of our music is. Low bit rates were really exposed but the large files and high bit rates made up for it. CD rips at 128 kbps are okay, but listening to anything higher is where headphones of this caliber shine.

We ran the extremely high tech hair dryer test with great results. The cushioning cups also did their other job, blocking out "bad" sound and holding in the good stuff. Music stays clear and the terrible external sound was mostly blocked out. Of course, noise-canceling headphones might fight this better, but they take batteries and that sucks.

Those around you will be able to hear your tunes if your crank it up, but at 50%- 75% volume, someone next to you in a car or on a plane won't hear a thing.

In a move that might win the market, Monster continues to excel with their anti-tangling cables. And believe me, I've tried to prove them wrong, but you wont tangle the included cable. Now, we would love to see how well these worked with earbuds, but the material, which feels like rubber and plastic had a baby and that baby is from Mars, fights tangles and is very durable.

On top of that, the remote was the best one we have tried. The buttons were so responsive and "clicky." The controls were accurate and instant, a welcomed feature. The microphone is good, but still sounds slightly distant at times, this could be from the mic pointing and resting on my shirt, but consumers shouldn't have to worry about that. When we made sure that the mic pointed up, the quality increased and was a ton better.

PROS:
+ Mids are great
+ And so is the bass
+ Portable
+ Anti-tangling wire with ControlTalk is almost like an added bonus

CONS:
- Build quality and use of plastic feels cheap
- Style could be slightly better based on some of the higher end cans we have seen
- Like most things, people will say they are pricey

THIS IS MEANT FOR...:
- Air and car trips
- Audiophiles that love their bass
- People that don't want to shell out that $$$ for the Beats Studios and want something smaller