on August 11, 2010
OVERVIEW:
Jabra, is a global headset brand that is owned by Danish company GN Great Nordic. We had a chance to take a look at their new bluetooth headset, the Stone. 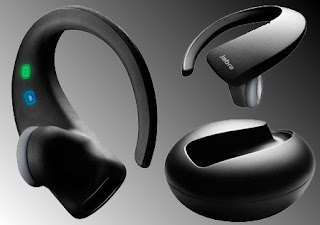 DESIGN:
The first thing we thought was, well isn't that a breath of fresh air to the bluetooth headset market. And it is, in a big and new way. The first thing you will notice is that there are NO buttons. That helps maintain the great sleek look and feel of the headset. The buttons are there, just are invisible touch pads or buttons that blend right into the design.

The moniker "stone" is from the way that the headset and charger come together to look like a stone that is perfect for a skip across a pond or lake. You won't want to throw this into the water after you slide it over your ear. That's right, I said over your ear. The design has the Stone going over the top of your ear and keeps a microphone off your cheek. A big thank you for that one. The mics (there are two and we will talk about how they work later) are on the side of the stone.

Everything is sleek, polished and looking good. The only draw back to design is the fact that the Stone can ONLY be worn on the right ear. Not a huge thing for most, but I personally prefer to have the mic on my left ear. Not sure why, but its a thing I have. Another draw back is the unnecessarily short charging wire. Get ready to let your headset just dangle from a wall outlet.

At only 1/4 of an ounce, the headset won't weigh you down and ruin your neck. The charger will more than double that weight, but will nicely slide into your pocket.

HOW DOES IT SOUND/WORK?:
Before you had to choose style or sound quality, but here we have a great blend of both. The two microphones, one aiding in noise cancellation, sounded great. So great that the people that were on the phone with me could not tell that I was on a bluetooth headset. The Stone also boasts Jabra's Noise Blackout Extreme technology, which is their new noise cancelling technology that reduces ambient sound without losing any voice quality.

Cars would drive by with holes in their mufflers and the person on the other end would not be able to hear it. Now, noisy areas like malls or public places or even wind will still produce some tiny amounts of background noise, but the Stone fought most of it away. This also makes voice dialing in louder environments easier and more accurate. But that is on their end, on my end I would have loved for the speaker to be louder. And also for the volume touchpad to give some sort of audible feedback that it was all the way turned up.

Those "buttons" and touchpad were very responsive. The touchpad will take some getting used to, but the swipe was natural and provided an immediate response from the headset. The click of the call answer/end button was great. Pairing was easy too, everything went smoothly and the phone recognized it right away. But, the answer button couldn't be in a more terrible location. You will find it impossible to insert or remove the headset from the charger or your ear without pressing it. Also, it's also easy to hit the answer button when messing with the volume. Another functionality thing that has caused me to hang up on people when I was just trying to turn up the headset. Those are little things that will take some getting used to to solve, so don't let them ruin the experience.

On the downside, there’s no easy way to charge the headset portion directly, it uses a microUSB port for the AC adapter on the charger, and if you lose, misplace or forget it then you’re stuck with 2hrs of talk time and no more. The charger itself holds a six hour charge that will replenish the empty headset, but without it, well just don't go without it.

People who would consider themselves power users might not like the battery life or the need to take the charger with them. For me a two and a half hour phone call killed the Stone and I had to finish the final twenty minutes using the handset while the Stone recharged. Now, the use of microUSB is good because the charger doesn't have a special wall outlet and can even be charged using computers.

While staying on the negatives, at this point there is no SMS or email read back application or feature. So many other headsets in this range or slightly higher are pairing up with say vlingo, the Stone is still without that ability, which is a must in today's market.

As you would come to expect, there is support for voice dialing, only if your cellphone supports it. Also the ability to stream music using the Bluetooth A2DP stereo profile. Now you may be asking, how and why? Well the Stone combines the stereo tracks into a single, mono track for the one ear. So it becomes handy for previewing a song or YouTube video. You may not use it much, but its there. The active range for the bluetooth in our experiences was about 25 feet line of sight, so that goes for both calls and the audio streaming.

Multiuse is also here, which is Jabra's fancy way of saying that multiple devices can be paired at once. Works well, but without extensive testing and flat out perfecting, the process can feel like finger gymnastics.

CONS:
- Speaker could be a little louder
- Battery life and need of the charger are a big negative
- Charger wire is very short
- Can only be worn on the right ear
- Don't lose or go anywhere without that charger
- No SMS or email read back

THIS IS MEANT FOR...:
- People who dislike the traditional bluetooth headset look and feel
- Car travel with the great noise canceling feature
- All of the other times you need a bluetooth because this is a good one