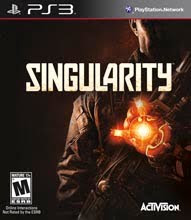 The game takes place on a mysterious island known as "Katorga-12." The island was home to Russian experiments involving an newly discovered element called "E99" that took place during the height of the Cold War era.

But sometime during 1955, a terrible catastrophe inside of a building called (the namesake of the game) the Singularity, occurred on the island. The accident caused the island's existence to be covered up by the Russian government.

In the game you control Nate Renko, a soldier who is sent to investigate bizarre radiation emissions coming from the island, only to crash land there. The game starts kind of slow, but about an hour in you find the TMD (Time Manipulation Device) and discovers that the island is constantly rifting between 1955 and 2010. You will use the TMD and audio recordings to put together the story of Katorga 12 and the use of E99. Do your homework, because you will need to make a Fallout 3 style decision at the end of the game.

He also encounters Victor Barisov, the scientist in charge of the Katorga-12 experiments who reveals that a man named Nikolai Demichev is on the island to try to restart them on a much larger scale, which could cause an unthinkable disaster. Demichev is looking to find the TMD and thus tries to capture you and control the TMD the entire game.

During the quest to stop Demichev, you will have to deal with hostile Russian forces from both time periods, and the terribly mutated plants and dilapidated structures along with former residents of the island who have developed time manipulation power of their own.

We really liked the story. And there is plenty of it through the use of some cutscene videos, audio recordings, notes and even "the writing on the wall" which you will uncover with the TMD. Time travel, cold war and mutation is a great start for some cool and more importantly, new experiences. The story was a little tough to follow but is continuously explained so that you won't get lost in the process. The corny way that it is presented though, that is really the biggest flaw.

The graphics won't blow you away, but they are serviceable. Sometimes we really wanted more out of the environment. Its such a blank slate to work with, the island just seemed blah sometimes. Because the game is strongly hinged on the atmosphere, the "world" could have been polished a little more. The games stays really linear, which is a drag because invisible walls kept us from exploring the promising world. Singularity's monsters and creatures were fresh and believable. Their fluid movement and creative models were scary and really one of the highlights of Singularity.

Guns looked good and the new uncharted technology was also creative and believable. The environment and use of colors reminded me a lot of Bioshock. It uses the Unreal engine quite well, but then again what doesn't? Voice work needs some and the Russian accents are quite cheesy.

But why spend your money on great Russian accents when you need it to develop some great looking and fresh weapons. Everything is there, a pistol, assault rifle, shotgun, sniper rifle, minigun called the autocannon and then some new guns. The Seeker is a rifle that allows you to control the bullet out of the barrel. It got me out of some rough spots and was a life saver. Everything involving the TMD looks good though. The impluse action looks great and the Ghostbuster style beam that comes out of the device also are strong points in the design department.

I would say that this is a combination of F.E.A.R. and Bioshock. Raven uses some great music and sounds to sell the fear associated with the mission. There were some great F.E.A.R. like scares by using you the corners of the screen to catch you off guard. But luckily they didn't jam that down your throat.

One a bad note, there was some tough looking texture issues throughout. Textures that didn't load until an action happened to that item. For example, a solider that I was tasked to find, was captured and he looked like a blob until he was pistol whipped. Its almost like the texture was slapped into him. That would happen a few more times, mostly during "set pieces" or in-game cutscenes.

There are a couple of things at work here. First the shooting and gunplay and secondly, the use of the TMD. Combined they are a lot of fun. I truly enjoyed using the TMD in cahoots with the guns in Singularity. Everything felt powerful.

First, lets talk about those weapons. Your traditional weapons are all here but they have both a 1955 and 2010 feel to them so they will fit in during each time travel sequence. Each weapon can be powered up using weapon tech, which gives you the chance to powerup things like clip size, reload time and weapon power.

But, the bread and butter for Singularity is the gadget that you receive about an hour into the game, called the TMD. On paper, you have limitless power, but with only the ability to interact with certain, predetermined objects, the TMD really just serves as a way to solve the rather simple puzzles throughout the title.

This device can alter time with incredible precision enabling its user to age or revert objects. Old crates filled with ammo can be made new again. Locks can be aged to dust to open safes or lockers. It is used in the simple puzzles in a very easy way. Move this here or break that, flip that switch etc... There are a few tougher ones that had me looking around for a while but most of them were just solved by finding the hard to see ladder. It always gets me.

One of the consistent puzzles involves finding a crate, slide it through gaps in five foot fences, and then revert it back to normal size to use as a step. Developer Raven didn't really push the bar here and with something like time travel and the ability to age and more things around (a la Half-Life) it was a let down for those expecting some fresh and new. Sure killing Russians with a combo of the TMD and guns is fun when you use the TMD to grab explosives out of mid air or even the nearest cyro freeze tank, but for the puzzles it is really just a let down and more importantly, a slow down.

There is also a weak mulitplayer that feels like a throw in at the eleventh hour. It is made up of two modes, both where human soldiers square off against creatures. The first is basically team deathmatch and the other is an objective based game where teams fight over set locations, think MW2's Domination. Like many shooters now, you start by picking a class or creature type, choose your weapon and perks, and start fighting. Sounds familiar, well its a mutated Call of Duty Modern Warfare without the community support. We waited and waited for about ten minutes before getting into a lobby and subsequently a game. But by then, the luster was gone.

It took us about seven hours to finish this one. That's a good length but with a weak multiplayer that has a small following meaning finding games can be a challenge, there is not much to do after you finish. Borrow it, rent it, but there are some many other great titles out there and that will be out soon, this might not be worth the $60. Singularity is a good bridge for Activision until we hit COD Black Ops, but there are not many memorable moments or aspects of Singularity that stood out and changed video gaming.

Many people say that this game isn't to be taken seriously because that is how it is meant to be delivered, and the campy presentation is just part of the experience. We say, with Singularity being developed by Raven, a company that was behind some games that lacked stories and were just heavy on the shooting (Solider of Fortune and Quake 4), this is what we expected.

+ Gunplay and weapons are fun and powerful to use

+ Ability to play with time is great

- Graphics leave a lot to desire

- Corny and cheesy presentation of the story

- The gameplay mechanics were hyped but sort of a let down

- Could have done so much more with time mechanic