on July 10, 2010
OVERVIEW:
Coby Electronics Corporation is aptly located in Lake Success, New York. They make all sorts of consumer electronics, from headphones to TVs, from digital photo frames to home theater systems. And in our case, we are taking a look at their 2.0" Mp3 video player, the MP-707.

DESIGN:
Pretty sleek looking little guy huh? We got the 4GB model in blue and thought that the color was really something that sets this one apart. Black and red are the other color options based on the sizes (2GB, 4GB and 8GB). The player is only 1.7" wide x 3.73" long x 0.38" tall and that adds up to a small device. Its about the size of remotes of some iPod docks we have seen.

The buttons are laid out in an all too familiar way. No scroll wheel here, its a multi-directional up,down, left and right navigation tool. Other than that, the button with "M" on it is the traditional menu button. And the button with two lines is more or less the options button that will bring up preferences based on what screen you are in.

Power is on the side and requires a simple slide down of the switch. Pushing the same switch up will hold and lock the player's buttons for when its in your pocket or bag.

The menu is simple in its function as well as its look. Everything is easy to see because of some good font choices by Coby. As for the video, well its a 2.0" screen. Its a nice feature to have for under $50, but I wouldn't watch a movie on that tiny screen. Something quick like a video podcast or something you shot would work nice. But in terms of following a plot of a movie, might be tough on that small of a screen. 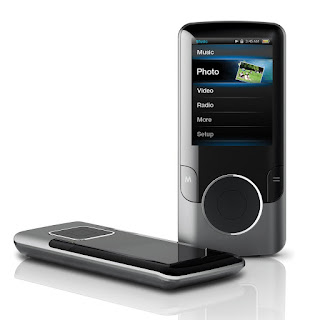 HOW DID IT WORK:
Its a good $40 Mp3/video player. You do get what you pay for here. We felt that the FM Radio addition was a good one. Many Mp3 players at this price point do that (would love to see it on the iPods) to separate themselves. I worked in radio for a quarter of my life and have a special place in my heart for a simple FM radio station.

Biggest gripe we had stemmed from the Coby Media Manager. It was clunky and tough to navigate. If you aren't familiar, the CMM is basically iTunes and allows you to preview and sync music/photos/video to your MP-707. Yes, there is a search bar to find music but it can be cumbersome to sift through tons of music and find the tunes you want to put on it.

On top of all of that, each time you use the media manager, it must rescan your computer for files. And if you have a lot of pictures, music and videos, that can take a long time. And, after each sync, the player turns itself off and will need to be rebooted. Why? Then to get to the music you just synced, it must refresh and update the files... Again, why?

Then there is video... The native format is MTV files and the media manager will convert the files. Files are played at 176x220 and 25 frames per second, decent but a lot is lost in the conversion. Being blunt, the MP-707 is not very Mac friendly because the Mac video files like m4v wouldn't play even after conversion. We couldn't even get Mp4s or AVIs to convert and play either. Basically, we could not get a single video format to work.

Images are supported as either JPEG or BMP format and look pretty good on the screen. Good for sharing with the family or friends. Colors look good, but on a small screen sometimes images are difficult to see.

Music sounds good. The player can produce a good amount of volume. For the record, we tested the MP-707 with the included Coby branded earbuds, which are weirdly shaped and didn't fit all that well, but sounded fairly decent.

As for tweaking, there are some simple and common EQ settings like "rock" and "pop" but no control other than that. The bass setting does a good job, but the others hardly have bass. A lot of the sound can be attributed to the headphones, but the source needs to produce the power. One of the strong suits of this player is the volume and power it produces. You can crank this thing louder than any other Mp3 player I have ever heard. That is both good and bad. Good for cutting the grass or plane travel, but the ear damage is also a worry.

Because of the color screen you would think that album art would show up, but it was sporadic to say the least. Some art showed up while most of it didn't.

Controls were not as responsive as we would like. I would find myself hitting menu too many times because I thought the first one did not register. Frustrating to say the least, but most of the problems came from the menu and option buttons. Tracking forward and backward and volume was responsive.
It took some digging to find the shuffle option, which is under the repeat tab. Finding that saved the review.

GRADE:
The FM radio option is a silent positive for Coby. Many people put it in the player, but this one was very good and could grab signals from pretty far away. Also, battery life was very good because of that small screen.

Not being able to get any video files to play is an issue. We consider ourselves pretty tech savvy and sort of converting the files until we found one that worked (something that the demographic likely to buy this one won't be able to do) we couldn't get anything to play.

The media manager also felt ancient, like my first Mp3 player in 2003. iTunes sets the bar and some think its not fair to compare iPods/iTunes to players like this. But why? The nano and shuffle function no problem.

Price is the big pull here. There are many players in this range all jocking for your dollars. This player could have added a good voice recorder to really solidify itself in the market.

CONS:
- Media manager can be difficult to use
- Features and options can be tough to find in menus
- Included earbuds were oddly shaped
- Buttons can be unresponsive and navigation isn't obvious
- Needs a voice recorder