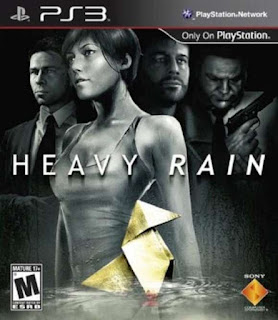 CONTACT FROM WHICH GAME WAS RECEIVED: Claudine Ricanor from SCEA

Heavy Rain is the highly anticipated realtime-event based thriller from French developer Quantic Dream. It, for the lack of a better description, is a movie within a game. Sounds like it would be slow? Well, the gut-wrenching story with leave the controller locked in your grips.

This is a tricky review because the story is the game. The game has a ton of elements, but the story line is the superstar here. And giving away too much would ruin the entire experience. I will tell you this, Heavy Rain focuses on the lives of four strangers as they feel the effects of and investigate the murders by the Origami Killer.

The four characters are, Norman Jayden an FBI agent, Scott Shelby a hired private detective, an insomniac journalist named Madison Paige and a father named Ethan Mars who, as the early character of focus, goes through the wringer of emotions.

That group all start apart, but much like the movie Crash, find themselves running together in the pursuit of the Origami Killer

Its this character building and story structure that makes every action feel so personal. Every choice you make affects the outcome of the game. Many games have used that as a selling point before, but only Heavy Rain makes it work. Each segment of the game can end anywhere between three to 12 different ways with tons of decisions to be made in the process.

This game is linear in the way it directs you and keeps you in areas that have pertinent items and information. With fences closed and various “stuff” in the way, it screams open world, but with so many things to discover as part of the story, the focus was on piecing together the story instead of the Grand Theft Auto style of sandbox play.

The controls are based on movements of the right stick, gyrations of the controller and some button pushing. As you approach objects or people, a controller cue shows over top of the selected item. To open doors, slide up on the right stick. Wanna sling open the fridge, those familiar with Fight Night will throw a hook (slide stick right or left and then up). The basic control is to walk and explore, but when you get more involved, another extremely well done facet of the game shows itself.

For the intense movements of the game, fight scenes or a driving sequence that almost had me chew through my lower lip, an incredibly well done realtime-event control system takes over. You must hit buttons in a fury while other times you must tap quickly and hold. To sum it up, it’s a work out for the digits. And the best part, because the realtime events come often and most times without a headsup, the timing is forgiving and if you mess up a event, it will just put you in another situation. For example, if you are in a fight and miss the button to punch or push your adversary, you don’t die, the foe will just hit your or push you, sending the fight into another direction.

The walking is not clunky and with rapid camera changes the controls wont flip on you as you head out of a door into another room. The camera sometimes will fight you, but the game during those movements is slow and with some repositioning, the camera flaws will remain relatively unnoticed.

Heavy Rain’s graphics are incredible. The facial expressions and movements are as true to life as I have ever seen. Beards, as weird as this is, are so lifelike; I started growing one of my own.

The rain is a strong part of the story, and it looks and sounds great. It gives you the sense of importance and dreariness at the same time. Its always raining, its part of the storyline, so prepare to get wet.

The voice acting is so well done that this, although its been said a million times, could and should be a movie. The story and gameplay lends its self better than Tomb Raider or any of the other B list video game movies. One down side though, the characters are supposed to be American, why have French and British actors voice the game.

No multiplayer, but how would you. No powerups, but how would you. And no leveling system, but then again how would you. Heavy Rain doesn’t use the cheesy elements of many games to give you a sense of accomplishment. You solve the crime or you don’t. You survive or you don’t. There are no do overs. And with the game able to end and play out in so many different ways, you honestly could play through multiple times and experience new things each time. Its not huge in scale like Fallout 3 or Grand Theft Auto, its huge in story and elaborate decisions that put you in the game.

I think about this game still. What could I have changed? What could have been done differently? This game brings you into its story and then you live it. I wasn’t controlling the characters that were hunting down the Origami Killer, I was consistently thinking about the clues and story until I was hunting down the killer.

This title is an amazing achievement in interactive video gaming. Sure in other titles your decisions played out, but not to this level or extent.

IF YOU HAVE A PS3, YOU MUST GIVE THIS A PLAY OR OWN IT. I PROMISE YOU WILL NOT BE DISAPPOINTED.